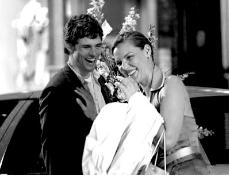 In “27 Dresses,” Katherine Heigl stars as Jane, a hopeless romantic whose sole purpose in life is to help those around her. Jane runs countless errands for her boss, George (Edward Burns), accommodates her younger sister’s (Malin Ackerman) every whim and epitomizes the cliché, “always a bridesmaid, never a bride,” devoting all of her time to helping her friends with their weddings. With each wedding comes a new bridesmaid dress, and Jane keeps her collection of dresses, 27 in all, in one bulging closet.

At one of these weddings, Jane encounters Kevin (James Marsden), a cynical news writer who, upon discovering Jane’s obsession with the weddings of others, decides to do an exposé on her.

Kevin’s assertion that, “Love is patient. Love is kind. Love means slowly losing your mind,” is the opposite of Jane’s ideology. Jane is hopelessly in love with her boss, George.

To complicate matters further, when George becomes engaged to Jane’s sister, Tess, Jane is called upon to plan their wedding, and Kevin pretends to be writing a story covering the event. Because of this, Kevin and Jane grow closer, and, after an episode involving a hydroplaning car, the New York countryside, and “Benny and the Jets,” all seems right with the world.

Anyone who saw the previews knew the movie was a”chick flick”. And, upon reaching the theater, the assumptions were reinforced. Out of a theater packed with 151 people, only eight were male, and I got the impression that many were dragged to the film by their girlfriends.

The storyline seems almost painfully basic: Boy loves Girl. Girl loves Other Boy. Other Boy isn’t right for Girl. Girl almost misses Boy because of Other Boy. Boy and Girl are in love. Love leaves because somebody screws up. Boy and Girl make up. Love conquers all.

Almost identical plots occur in “chick flicks” like “The Princess Diaries,” “Sweet Home Alabama,” and “The Notebook.” However, “27 Dresses,” is fun and refreshing. Perhaps it was seeing it with 140 other girls who all laughed at the same moments and sighed at the same romantic lines, but I don’t think so.

Although very funny, “27 Dresses” stays far from the mindless fluff that passes for entertainment today. The lines are genuinely witty and the almost slapstick feel of some moments only adds to the sincerity of the serious parts.

As for the necessary romance, the plot throws viewers for an unexpected and interesting twist at the end. I think every girl in the theater left satisfied, but even more telling, I spoke with three guys after the film, and each only told me how great they thought it was. Not bad for a “chick flick”, huh?