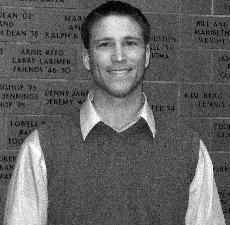 Beschorner, a 2000 Simpson graduate, will serve as the offensive coordinator and assistant head coach. He will also recruit in northwest Iowa and Arizona.

Before joining Simpson, Beschorner worked at the University of South Dakota for five years, throughout that time serving as a running backs coach, recruiting coordinator, camp coordinator and secondary coach.

Ferguson, also a 2000 Simpson graduate, is returning to the Storm for his fifth year of coaching, but will serve as an offensive assistant coach and the recruiting coordinator.

In the past four seasons, Ferguson coached defense for Simpson football, and prior to that was a strength and conditioning coach for one year and a track and field coach.

Cordes will serve the Storm running special teams and as the co-defensive coordinator with Glogowski. He will also recruit in northeast Iowa and act as a liaison between Simpson and Florida.

When deciding on the full-time positions, Glogowski was looking for good guys who treat the players with respect, are easy to get along with and ultimately good coaches.

Beschorner’s and Cordes’s previous recruiting connections and familiarity with Iowa were also important, as was Ferguson’s ties as an alumnus and having worked here for a few years. Glogowski also wanted to get coaches that would change the energy level and momentum.

One similarity in what the three coaches offer the football program is their enthusiasm and excitement.

“I think what we all bring to the table is energy and a new way of carrying out our day-to-day stuff,” Cordes said. “We are going to bring a sense of urgency and fire to this program and it’s headed by Coach Glogowski and the things that he believes in.”

Although the coaches are from different programas, these differences are very valuable.

“The experience of working under three different coordinators and bringing all those thoughts and ideas to come on board here is a really good experience,” Cordes said.

Because two of the coaches are Simpson alumni, there is a strong connection to the college.

“I bring a lot of pride to the college I graduated from and I want to see us get back to the level of success, from a win-loss standpoint, that we’ve been at before,” Ferguson said.

Beschorner and Cordes also bring their experiences of being part of programs that have turned things around, witnessing winning records after a series of losses.

The coaches are looking forward to actually playing football in the new spring league and the regular season, and their first game days.

“I just want to get a bunch of guys in here, who are obviously going to be tremendous students-which we know, otherwise they wouldn’t be in school here-that really love to play the game, are going to compete, are excited and passionate about winning a bunch of games,” Beschorner said. “That’s what we obviously all want to do.”

All four of the coaches are aware of the importance of creating an exciting atmosphere for games and the campus involvement and support needed to create that atmosphere.

“It takes everyone to win a lot of games,” Beschorner said. “From coaches, players, administration, professors, admissions, everyone has a hand in your program, it’s not only the guys but all the students on campus.”

The coaches are also attentive to the fact that students are here for academics first and for athletics second.

“I think we’ve got to do a great job of getting good quality student-athletes, and I say that in all sincerity,” Glogowski said. “I want guys that want to play football, that are excited about football, it’s important to them to play football, but yet they still understand that getting a degree is the biggest thing, and I think if we do things the right way the winning and losing will take care of itself.”

Freshman Greg Rhoulhac likes the dedication and enthusiasm of the new coaches.

“I think they are a good match for Simpson because they are young and motivated which is what Simpson’s young team needs,” Rhoulhac said.

Besides the three full-time coaches and the head coach, four part-time coaches will join the staff in the spring, and there will also be student-assistants coaching for the Storm.