Storm wrestlers looking to pick up steam heading into conference 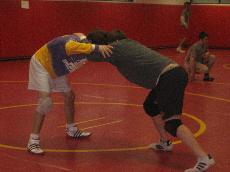 As the Storm wrestlers head into the final leg of their 2007-08 season, there seems to be a couple of common goals-finishing the season on a strong note and earning the team’s 400th dual-meet victory.

Although the wrestlers say it’s a goal they want to reach by season’s end, they note their focus is less on the milestone and more on trying to improve upon the team’s 3-6 overall record for the season.

“It’s been a little disappointing,” junior Ben Hektoen said. “Obviously we haven’t accomplished all of the goals that we set for the season.”

Sophomore Curtis Barber said the team has been going through a little bit of a building process this season, dealing with injuries. But despite some struggles, Barber said he believes the team is ready to start turning the corner.

“Teamwise, we’ve been building,” Barber said. “We’re getting some kids that weren’t healthy, healthy again. We’ve really been improving on certain situations, and I think we’re about ready to start peaking.”

Assistant Wrestling Coach Clint Manny mentioned that, as of late, the team has been wrestling very well, and that improvement by some of the younger wrestlers is providing a little bit of optimism for the future.

“Right now we’re wrestling pretty well,” Manny said. “Some of our young guys are really stepping up which is good to see for the future.”

Along with discussing optimism, Manny also talked about some of the goals he hopes the team can achieve before the season comes to a close.

Freshman Caleb Brus also talked about getting to the national tournament, but said that first the team needs to concentrate on getting ready for the Iowa Intercollegiate Athletic Conference tournament.

“Our main goal as a team right now is to get everyone ready to compete at the conference tournament,” Brus said. “I need to be able to upset some people to give myself a chance to wrestle in the national tournament.”

One other goal some of the wrestlers talked about was capturing the 400th dual meet victory in the history of the wrestling program. Freshman Caleb Brus said that, although he personally doesn’t feel a lot of pressure to reach the milestone, he knows it’s something that the team would love to accomplish.

“I personally don’t feel a lot of pressure from the coaches to attain this,” Brus said. “But I know this is something they expect us to get done.”

Hektoen said that there’s not a lot of added pressure, but indicated a little frustration at the fact the team had been stuck one win shy of the milestone for quite some time.

“We’ve been stuck on 399 for a while now,” Hektoen said. “Hopefully we can get that done. I know that would be big for the program. It’s definitely something that’s in the back of your head.”