Black History Month to be celebrated with wide array of events 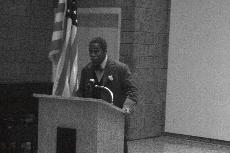 February is Black History Month and the Simpson community is doing what it can to raise awareness and foster education. There are several events occurring on campus this month and each has a different goal in mind.

“I think students will get a greater sense of knowledge about Carver as a person,” Lain said.

He also hoped that students and others in attendance would something out of William’s performance.

“I hope they take away Carver’s leadership qualities and expand on it,” Lain said.

Other events taking place on campus include a soul food sampling, which took place Feb. 20, a Sweetheart Dance with the theme “Colors of Luv 2008,” on Feb. 22 and a diversity leadership conference on Feb. 23.

The diversity leadership conference is being held from 9 a.m. to 1 p.m. Saturday, Feb. 23 and features an up-and-coming role model from the Des Moines area. Isaiah McGee will be on campus to talk about leadership and values.

“It’s good for students to see someone out there dealing with issues and doing well,” Lain said.

Senior Sheena Smitley thinks the dance will be a good way to connect students with different cultures.

“It’s a way to celebrate skin colors and the diverse groups of people that our world encompasses,” Smitley said.

Black History Month was started in 1918 by Carter G. Woodson to teach black people about their own culture and to inform others that African Americans have made contributions. He wanted black youth to know their roots and how African Americans shaped the culture of the country. The movement started out as a week and then grew to become a month long celebration.

Lain feels that not all news coverage is positive and Black History Month is a way to clear some stereotypes.

“There has been so much negative press and beliefs in society,” Lain said. “It’s good to show that not all the stereotypes are true.”

“You can’t have United States history without black history,” Wilson said. “It’s crucial for a campus where black people aren’t visible and not representative of the student body.”

“Much of America’s African American past is forgotten, but it really is a huge part of why America has come as far as it has,” Smitley said.

While Simpson is providing events to raise awareness and provide education, there is always more that could be done.

“Students, faculty, alumni and the community are always talking about bringing diversity to Simpson College,” Smitley said. “But the truth lies in our actions.”

While Black History Month is important, Lain believes it is time to branch out and start including other minority groups.

“It should be an ongoing celebration of culture,” Lain stated.