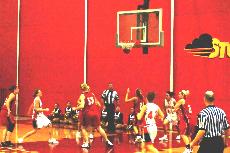 The women’s basketball team is enjoying their fair share of success this season as they stand at 19-1 overall and undefeated at 11-0 in the Iowa Conference. But don’t forget another tiny little statistic. The women are also currently ranked as the No. 7 Division III team in the nation. However, with great talent comes great responsibility.

“We don’t talk about it a whole lot,” Brian Niemuth, head women’s basketball coach, said. “I do let them know the responsibility of it and that every time they step on the court they have to represent and play hard and act like the No. 7 team in the nation.”

The Storm received their highest ranking since they were No. 2 in the 1999-2000 season just days before a record setting 120-41 defeat of Central at home on Feb. 7. Senior guard Carlie Beals views the ranking as a great accomplishment but also knows there is more work to be done.

“We look at it as we have worked hard but we still have a long way to go,” Beals said. “It’s nice but it doesn’t mean anything unless we prove ourselves every game.”

Besides talent, the team has used its experience to achieve their success. Nearly every player returned from last season’s squad that went to the Sweet 16 round of the National Collegiate Athletic Association Tournament. Niemuth, in his 21st season as head coach, regularly rotates ten players, and often more, as he understands what the biggest strength of his team is.

“We have really good depth,” Niemuth said. “In college now everybody has a good starting five, but the bench is where you really see the differences.”

Beals attributes the success to hard work as well as strong team chemistry.

“We get along really well,” Beals said. “We all have the same goals of working hard and we like being around each other.”

As the Storm has been displaying their talent on the hardwood, they will add a new dimension to their game. The team will be wearing pink shoelaces to support breast cancer awareness in their Feb. 16 home game against Wartburg.

Turner is leading the way to organize the event, which is called “Think Pink.” A portion of the money from entrance fees as well as from donation boxes will go to the Women’s Basketball Coaches Association’s Cancer Fund. Simpson is among more than 650 other NCAA institutions that will be participating in their own form of “Think Pink” Feb. 8 through 17.

“I think it will be great,” Turner said. “You can’t go wrong with something like this.”

Involvement in “Think Pink” doesn’t end with the players. Referees will be using pink whistles and fans are invited to wear pink as well. Pink and white basketballs will be auctioned off during halftime along with several giveaways and a personal presentation. Informational packets will be at both entrances and additional information is available at WBCA.org, which can be found on the Simpson Web site.

While everyone is excited for the activities surrounding “Think Pink,” the focus is still on basketball.

“We can get better defensively,” Niemuth said. “Our focus is not on who we’re playing but on ourselves to get better each game.”