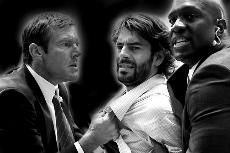 What happens when you get five different views of the same event? You can expect a lot of chaos and pieces of a puzzle.

“Vantage Point” is about a peace summit in Spain that turns deadly after the President of the United States is shot. The rest of the movie is seen from five different viewpoints starting from the exact same time. These different viewpoints help the audience piece together just exactly what happened, what is to come and who committed the crimes.

The first view is of the news station reporter filming the event for international audiences. The camera shows a reporter, Angie Jones (Zoe Saldana, “Drumline”) capturing the events and her producer, Rex Brooks (Sigourney Weaver, “The Village”) calling the shots. After different camera angle shots, one sees the horror break lose and the violence starts to unravel.

The second point of view is from one of the president’s bodyguards, Thomas Barnes (Dennis Quaid, “The Day After Tomorrow”), who has recently been allowed back on duty from a recent gunshot wound from protecting the President in a previous event. Nervous and shaky, Barnes is on the lookout for any suspicious behavior. He is the key player to how everything is revealed.

The third viewpoint is from a bodyguard to the Mayor of Spain. He is mistaken by Barnes as a suspect to the President’s shooting, but in fact was just trying to protect the mayor. His story is wound around the focal point of the story but still is an important character to notice.

The fourth view is from an American tourist, Howard Lewis (Forest Whitaker, “The Last King of Scotland”), who is filming the peace summit for his family to see at a later date. Little does he know he is filming something that will go down in history. He follows Barnes’ eyes to a moving window curtain. The events fold out with Lewis chasing it all and capturing most of it on camera.

The fifth and final point of view is from President Ashton (William Hurt, “Mr. Brooks”). This is when the story takes a real turn. Viewers see the president getting prepped for his speech by his advisers and then taking a different route due to a warning of a terrorist attack.

Directed by Pete Travis and written by Barry Levy, there are very few times the audience is left in a bore. While the end of each viewpoint leaves the audience in an annoying cliffhanger, the audience is nonetheless taken on an amazing journey of revelations and plot twists.

The real disappointment was in the end. One is given so much action, thrill and suspense that when the end draws near and the answers are given that it’s almost a downer. There was no huge climactic moment, just the final piece to the puzzle.

If you’re prepared to watch carefully and be kept at questions until the end than I would recommend this movie. For those who want the thrill throughout, I would say skip it and wait for the next blockbuster.