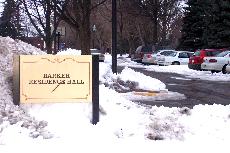 Freshman David Doely didn’t believe it when his dad called to tell him the police found his 2000 Jeep Cherokee Sport in Des Moines with the windows smashed out and the stereo system gone.

“I didn’t even realize it was missing until my dad called me,” Doely said. “He said the Des Moines Police department had found it. I figured it had been impounded or something.”

Doely said he had last driven the vehicle on Monday afternoon. When it went missing, he thought it had been towed.

“I went to Security and told them about it,” he said. “He [the security guard] thought maybe I’d misplaced it.”

According to Doely, someone took the vehicle from the Barker parking lot Monday or Tuesday night. The Des Moines Police Department found the vehicle on Wednesday, Feb. 13. The windows had been broken out and the stereo was missing. It had been left at a tire repair business in south Des Moines.

“A guy at the tire place actually called the police and asked them about it because he found it,” Doely said. “They must have just dropped it there.”

Director of security Chris Frerichs contacted the Indianola Police Department who impounded the vehicle and then took it to be repaired.

Doely expects to have the Jeep back by the end of the week.

“My brother and I will have to look over it and see if anything else was taken and report it to my insurance company,” he said.

Frerichs said this is the first report of a stolen vehicle he’s heard in a long time.

“This is the first vehicle stolen from Simpson property in the last eight years that I can remember,” Frerichs said.

Frerichs also said that the location where the theft occurred is an uncommon one.

“Very few incidents occur in the Barker lot,” he said.

Freshman Kayla Hamilton, who also lives in Barker, said she is not too concerned about the security of parking on campus.

“When I saw that there was a theft I actually thought they meant something was taken out of a car, not an actual car was stolen,” Hamilton said. “But I always lock my car and I never leave things in it. I’m never worried about it.”

However, freshman Megan Cook, another Barker resident, expressed some concerns.

“I usually park in the Goodwill lot and I don’t use my car every day,” Cook said. “It makes me kind of nervous when I go a few days without seeing it.”

Frerichs has some advice for students to keep their vehicles safe.

“Be sure to lock your vehicle and lock valuables in your trunk or store in your residence hall room,” he said.