Well-known opera to be performed at Simpson 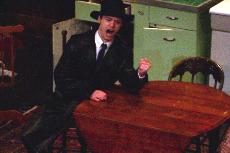 The Music Department is currently rehearsing for its spring opera. This year’s production will be “The Consul,” an opera by Gian Carlo Menotti, an Italian-American composer. “The Consul” is set in mid-twentieth century Europe in an unidentified totalitarian state. The story was written in 1950 as a political commentary in the years following WWII, but its application is just as real today.

In “The Consul”, a political dissenter named John Sorel, in fear for his life, is forced to flee his country. In order to join her husband, John’s wife Magda must apply for a Visa at the consulate. Magda is not the only person desperate to escape her land, and, with others at the consulate, waits endlessly for her papers to come through. This is especially difficult as John’s elderly mother and their baby weaken by the day. This tragic opera is a profound look at tyranny and human nature.

“I think that it’s inspiring,” junior Christy Hungerford said. “The opera deals with being strong through terrible adversity.”

In choosing this opera, Larsen is revisiting the past. In February of 1957, “The Consul” was the first opera that Larsen directed at Simpson, and he has directed it several times since. The last time that the Music Department performed “The Consul” was 20 years ago, and, interestingly, the woman who played Magda in that production, Beverly O’Reagan-Thiele, has the distinction of singing that role on the only recording of “The Consul” out at present. This year’s performance of the opera will be Larsen’s fourth time directing the show, but it will be the first time that the Simpson community will see “The Consul” done with a full orchestra.

Larsen’s decision on this opera also had a good deal to do with his students.

“I always choose productions based on what students we have,” Larsen said. “Students always find ‘The Consul’ a great challenge, but it is wonderful to discover that we have a cast capable of its performance.”

The opera double-casts sopranos senior Lauren Brown with Kim Roberts, assistant professor of music, as Magda. The Mother is sung by a combination of mezzos senior Katherine Currie and by Professor of Music Maria DiPalma. The role of John Sorel is filled by junior Jesse Stock and sophomore Chris Carr. Senior Eric Bruce sings the Secret Police Agent. Junior Danielle Greiner is the Secretary to the Consul. The other desperate people in the Consul’s office include Mr. Kofner, sung by senior Nathaniel Schmidt and sophomore Peter Merchlewitz. The Foreign Woman features junior Shannon Prickett and senior Bethany Glendenning. Vera Boronel is sung by senior Whitney Hansen. Anna Gomez is played by junior Evelyn Rossow and senior Mary Barrett. The Magician is sung by juniors Andrew Weisheit and Adam Skog and Colt Ballou and Eric Michael Martin sings the role of Assan, the glass cutter.

“This is one of the most difficult things I’ve ever done,” Currie said. “But it’s definitely worth it. Once you put it all together, ‘The Consul’ is amazing. The story is in the music.”

“The Consul” will run Friday and Saturday, Feb. 15 and 16 at 7:30 p.m. and Sunday, Feb.17 at 2 p.m. in Pote Theatre in the Blank Performing Arts Center. Student tickets are free but must be reserved in the music office and general admission tickets can be purchased there as well at $15 for adults and $10 for students 18 and under.

Larsen expects “The Consul” to leave a lasting impression.