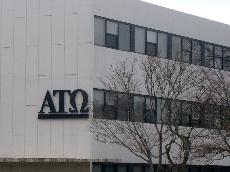 The president of a campus sorority is facing charges of domestic assault after an early-morning incident involving a male student. Junior Andrea K. Kinnetz, 21, was arrested for domestic assault causing injury on Feb 17.

As stated in the Indianola Police Report, officers were requested at 2:18 a.m. to respond to the incident, which occurred at Alpha Tau Omega fraternity.

According to the report, when Keller arrived, Kinnetz, the president of Kappa Kappa Gamma, smelled of alcohol and was visibly upset and crying. Kinnetz told the officer she was upset because Sailer, 21, had been talking to other females at the bar.

According to the report, physical contact occurred between Kinnetz and Sailer, and Sailer had visible cuts and scratches on his face.

The report continues, noting Kinnetz said she did not know whether she hit Sailer first or not.

Kinnetz was deemed the primary physical aggressor and placed under arrest.

“Sometimes the State of Iowa Code requires an officer to make an arrest, specifically in a domestic assault if there’s an injury involved,” Keller said.

Indianola Judge Richard Clogg issued a no-contact order between Kinnetz and Sailer. The order allows for interactions within the college setting but no personal exchanges. Both parties have since filed to change or dismiss the order. Kinnetz will appear in court on March 4 for a hearing regarding the status of the order.

Kinnetz declined to comment regarding the case. Sailer finds the incident to have been an unfortunate escalation, and hopes to continue positive interactions with Kinnetz.

“I know she is a good person and it was just a bad situation that got blown out of proportion,” Sailer said. “Andrea has been one of my best friends while at Simpson and she will continue to be after this incident is over. It’s hard for me to see her go through all of this but I know she is strong and everything will be ok in the end.”

Sailer also said he will not press charges. Kinnetz, is facing one count of domestic abuse assault causing bodily injury or mental illness from the state.

According to Keller, the county attorney will decide whether to amend, drop, or proceed with the charge. Kinnetz has no previous charges of domestic abuse-a felony-on her record.

While many domestic assault incidents are perpetrated by a male partner, according to the Office for Victims of Crime, statistics show a man is victimized by an intimate partner every 6.7 minutes.

Professor Rachel Bandy, assistant professor of criminology, offers awareness on the emotional implications of this form of domestic abuse.

“Men and women don’t experience domestic violence either with the same frequency or in the same way,” Bandy said. “Male victims absolutely 100 percent deserve compassion and assistance and support as much as anybody.”