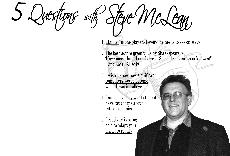 Professor of Theatre Steve McLean has been working on Simpson’s theatrical sets for around 17 years now, setting up lights, sound and stage. He received his degrees in secondary education and speech communications and theatre. Then, he went on to Penn State where he got his graduate’s degree in design and technical theatre and graduated in 1986. About five years after graduating, he came to Simpson in the fall of 1991. Since then, he has helped create numerous sets at Pote Theatre. One of them includes “Pride and Prejudice” and currently, McLean is working on the set for the upcoming opera, “The Consul”.

“I like starting from a script or an idea and meshing that idea with the other designers,” McLean said.

McLean’s favorite part about being a design and technical director is that he enjoys being able to create something completely unique for each show that he does. When he is not working on one of his sets, he enjoys gong to movies or the theatre. He also likes to go kayaking and vacationing in Florida in the summer.