SGA to purchase AED for Cowles 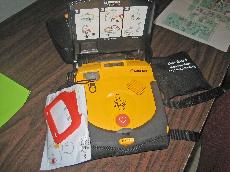 The Student Government Association has decided to purchase a new automated external defibrillator for Cowles Fieldhouse.

AEDs are used during apparent cardiac conditions. Hadden said they can sense a person’s heart rhythm by applying pads to the skin. Everything is automatic, and the machine will shock a person if it needs to.

“The machines used to be exclusive to ambulances and hospitals,” Hadden said. “Now they are in a lot of public places.”

Using an AED can increase patients’ survival rates dramatically. They also help to prevent brain damage that can occur from a lack of oxygen

“I think it’s important because the current ones are not accessible for all events,” Keller said.

Cowles was selected for a new AED because of its location and the type of activities that take place there.

“Cowles is probably the place on campus with the highest volume of people on a daily basis,” Mike Hadden, director of athletic training, said. “It holds a lot of events.”

Senior Emily Salberg, senior class president and an athletic training major, said having an AED in Cowles is important for athletes and those who use the weight room.

“There should be one in the facility where people work out, where there’s intramurals, athletes and fans,” Salberg said.

Cowles is home to many sporting events, including practices and games. Many people also use the weight room and attend class in the building every day. Several large events, such as graduation, are held there each year.

Hadden said there have been some issues with people having heart problems in the past.

“We’ve never had to use an AED, but we have had people with chest pains and people with past histories of heart problems,” Hadden said.

Earlier this school year a student athlete was taken to the hospital during a sporting event suffering from chest pains.

“That’s why it is important to get one now,” Salberg said. “We don’t want this to be a situation where it’s an aftermath thought. We don’t want to look back in hindsight and wish we would have had these.”

There are currently two AEDs on campus. One is located in Smith Chapel and the other in BSC.

According to Director of Security Chris Frerichs, the school purchased the AEDs about three years ago. The AEDs at Simpson are designed for easy use by the public.

“Everything is automatic,” Hadden said. “A young child could use one. The machine tells you everything to do. You don’t have to have a working knowledge.”

“Within weeks they had nearly a dozen AEDs located around the campus,” she said.

A recent study at Simpson revealed that with the locations of the current AEDs, it takes anywhere from one to six minutes to get across campus.

“Having an AED in Cowles will cut down on the time it will take to get to places,” Hadden said, “especially for events in this building.”

After Keller raised the concern to SGA leaders, Salberg discussed it with professors from the Athletic Training department.

“They’d been wanting one for some time,” Keller said.

It was brought before SGA last month when members then voted to purchase the AED with extra funds from their budget.

“We decided and voted,” Salberg said. “SGA felt like we had the money. It’s something we can buy. It’s just going to be good for everyone, all the students, people who participate in intramurals, people who work out in the weight room and people whose fans and families come to their games.”