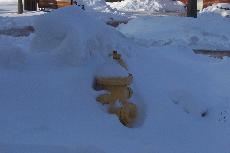 Ice on campus has created concern for students walking to and from class. The early winter has brought over 40 inches of snow and periods of thaws and freezes.

Jesus Mendez, physical plant facilities director and Grounds Manager Jeff Wagner both agree this winter has been a challenging season.

“What’s really been the toughest part too is the way the weather patterns have been,” Wagner said. “It snows and then we get a little bit of thawing and then we go into a deep freeze which causes more problems with re-freezing.”

For some students, the ice is a daily concern. Junior Katie Sawer, an active theatre major, has cerebral palsy and the feels the weather tests her coordination on a daily basis.

Sawer’s first concern is her health. She owns a wheelchair, but cannot use it during the winter months because of the snow.

“This year, it’s been a pain because I drive to the nearest parking spot and I still can’t guarantee that I am going to make it to class without falling,” Sawer said.

Other students do feel that crews are doing all they can with the people and equipment they have all ready.

Junior Trisha McCusker has this attitude even though she, like many others, is tired of the snow.

“I think they are doing the best they can,” McCusker said. “We got a lot of snow so it’s difficult to get all of it removed in a timely fashion. A lot of it they have to do manually, and I guess there’s a point where they can keep shoveling at the sidewalks, but we are just going to get more snow.”

McCusker, who has admitted to falling a few times this semester, suggests that students be a little more cautious when they are walking on campus.

“Once again, there is so much they can do,” McCusker said. “I don’t know if completely putting that responsibility on their [Simpson’s] shoulders is fair. I guess just be careful.”

To keep students as safe as possible while walking across campus, the Physical Plant employs four full-time grounds employees to clear paths and walkways across campus. Their objective is to have all sidewalks cleared at least once before 8 a.m. if there has been nightly snowfall.

A large amount of attention is also directed towards the brick sidewalks. Whenever a reasonable amount of snowfall or freezing rain is expected, they are pretreated with chemicals to prevent from freezing as easily. The chemical contains a blue indicator, but the tint is sometimes covered by snow before classes begin.

Unfortunately, the chemicals Simpson uses are not as effective in weather conditions lower than 5 degrees. If Simpson were to use harsher chemicals, they could harm the surrounding grass and bushes along the sidewalks.

“I’ve seen places where they use the hardcore ice chemicals and it can do some damage,” Wagner said. “We have to be conscious of the environment.”