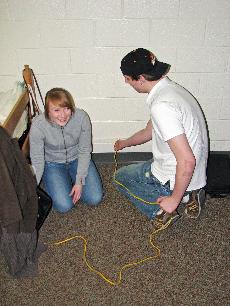 Simpson concern for the health and safety of its students has provoked administrators to discontinue the use of extension cords throughout residential halls, apartments and theme houses.

Mandy Fox, director of residence life, outlined the specifics of the new regulation in a campus-wide e-mail, stating “all electrical items and appliances need to be plugged into a power strip or directly into a wall outlet.”

Fox remained uninvolved with the recent fire code inspection and served only as the disseminator of information to be passed along to students. She has since received student feedback concerning her e-mail. Some students are concerned with their rooms or right to privacy.

In accordance to the Student Handbook, Simpson College reserves the right to inspect rooms for college-related purposes.

For more of a monetary than safety reason, freshman Louie Elbert, a resident of Barker, took the message into consideration.

“I didn’t know if they were going to be checking around, and I didn’t want to pay a fine for something as useless as that,” Elbert said.

According to Fox, it will now become a serious offense if students use extension cords.

We’ve been told by the fire marshal that it’s an issue,” Fox said.

On Dec. 17, 2007, Simpson College’s residential halls and housing units were inspected by state and city officials to evaluate campus’ compliance with national fire codes. Violations included the use of extension cords and emergency exit lights.

“The things that we were cited on were normal,” Gary Dooley, physical plant assistance director and maintenance manager, said. “We considered we did very, very well on this inspection.”

The fire code process begins with a notification sent to the college that an inspection will be held. Officials arrive, conduct the evaluation, and report issues in an official document to the school. Simpson College then has 30 days to resolve any problems, and a re-evaluation will occur.

Simpson College has never been fined for violation of a safety code, and January 31st’s re-inspection found the school to be compliant with all issues as reported in December’s inspection.

“The final report has been faxed to the state fire marshal for protocol,” Jory Hunerdosse, a paramedic and firefighter, said. “Everything passed with flying colors.”

In regards to the number of fire incidents on Simpson’s campus, the school has only dealt with one major fire within the last 20 years and hopes to never become a statistic. The school spent approximately 1 to 1.5 million dollars around campus 15 years ago to ensure student safety by installing egress windows, sprinkler systems, window wells, and heat suppression systems on all stoves.

“I hope this is more of an awareness for students,” Mendez said. “There’s a reason for why you shouldn’t have an extension cord … so you don’t have a fire.”