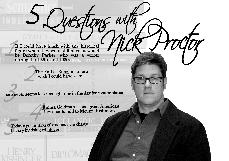 Nick Proctor, associate professor of history and department chair, has been teaching at Simpson for the past nine years. He came to Iowa after being in the South for the majority of his life. Proctor received his undergrad at Hendrix College in Arkansas.

After realizing it wasn’t for him, decided to head to Atlanta to attend Emory University. There, Proctor received his masters and Ph.D. in American History.

Proctor teaches three classes this semester, U.S. History since 1877, Western Civilization II and Senior History Research Seminar. Proctor has written a book titled “Bathed in Blood: Hunting and Mastery in the Old South,” which talks about hunting used as conspicuous consumption. He wrote this book during the 1990’s and it was available for purchase in 2002.

When Proctor isn’t teaching classes or writing books, he likes to play with his two kids. Proctor and his kids, which are ages one and five, like watching “Here come the 1, 2, 3’s” which features the band, They Might Be Giants.

Proctor also likes watching movies and he is currently viewing “The Wire Season 4” which aired on HBO. He also enjoys reading “The New Yorker” and “McSweeney’s Quarterly magazine.”