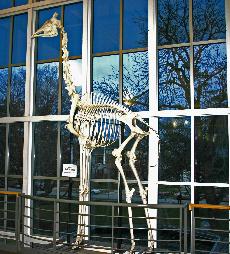 Over the past few weeks, the Simpson College community has been greeted by the unusual sight of a giraffe skeleton on the second floor of the Carver Science Center.

The skeleton belongs to a giraffe named D.J., who, while still living, was a resident of the Blank Park Zoo in Des Moines.

“In the past, they had given us small specimens to be used in classes,” Ryan Rehmeier, assistant professor of biology, said.

The idea of a giraffe skeleton ending up at Simpson came about after discussions between Jeff Parmelee, associate professor of biology, and Kevin Drees, director of animal care and conservation, of the Blank Park Zoo.

“Normally we joked around, saying wouldn’t it be fun to have one here,” Rehmeier said.

The joke became serious when D.J. the giraffe began having hoof problems that were causing him pain.

“He was an adult male who was 13 years old,” Rehmeier said. “He’s about an average size bull for that age.”

After several discussions, the zoo decided to let Simpson have the skeleton of D.J.

However, the price for the giraffe skeleton wasn’t cheap. According to Rehmeier and Parmelee, it cost around $15,000-16,000 in order to have the skeleton cleaned and prepared.

Fortunately for the biology professors, a donor was found.

According to Parmelee, Rehmeier found a benefactor who was willing to donate the $16,000 necessary.

After D.J. had been euthanized, Parmelee, Rehmeier and some Simpson students went to Iowa State University to perform a necropsy, the animal equivalent of an autopsy, on D.J.

Once completed, Parmelee and Rehmeier undertook the journey of transporting the bones to be cleaned and prepared.

“We got a Simpson College pickup truck and drove it down to Oklahoma City,” Parmelee said.

Once the bones were finished cleaning, the skeleton was ready for pickup and assembly. Before D.J. could be put on display, several modifications had to be made to make room for DJ, according to Rehmeier.

“They had to create an extra space, so they chopped out a part of the railing and put in a new curved one,” Rehmeier said. “That allowed [the skeleton] to be put in.”

The next step involved Parmelee and some of his students.

“In March, my comparative anatomy class put up the giraffe,” Parmelee said.

According to Parmelee, although the skeleton has been installed, there are still some modifications he is hoping can be done to D.J.’s skeleton.

“Steve McLean has helped us figure out how to put lighting up,” Parmelee said. “We also want to have a giraffe party and invite all who helped us out.”

Parmelee said the skeleton will be a great tool for educating the students of Simpson College.

“My students’ class project is to articulate the skeleton of an animal,” Parmelee said.

He also added that having a giraffe makes Simpson a very unique place.

“It certainly makes Simpson College more interesting,” Parmelee said. “There’s no other college in Iowa with a giraffe skeleton.”

Freshman Mindi Callison believes the skeleton has its advantages and disadvantages.

“It is really awesome to look at,” Callison said. “But I don’t need another thing on campus that is taller than I am.”

“It was a joint venture,” he said. “I’m glad it’s up and over with. It will be here for generations.”

“I hope that it becomes a neat thing for people in this building and hopefully people will be awed by this creature,” he said.