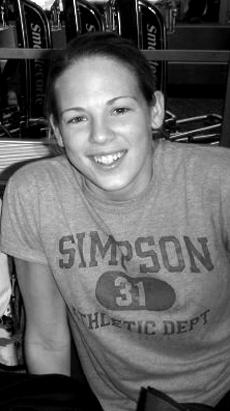 Senior forward Katelyn Whiton has been selected as one of the top 10 finalists for the Josten’s Trophy this year because of her performance on and off the basketball court this year.

The Josten’s Trophy is a national award honoring the most outstanding men’s and women’s Division III basketball players of the year. The award recognizes three very important parts of the athlete including basketball ability, academic competency and community service. The trophy represents a well-rounded Division III student-athlete. The trophy’s motto is “Service above Self.”

“It is a big honor to be selected for this award,” Whiton said. “However, none of it would even be close to possible if it wasn’t for all of the team and coaches that push me to get better every day.”

Whiton was a 2007 honorable mention All-American and has broken an individual record this season. She now holds the school record for career field goal attempts. Whiton is also second in school history in career steals with 222.

Whiton commented how being on the basketball team and reaching the level they are at has taught her so much about herself and taught her a lot of valuable life lessons that will help her later in life.

“Being a part of the team has been great,” Whiton said. “Along with the friendships, I have been able to be a part of a winning program.”

Whiton has been playing basketball for as long as she can remember; her mom even played basketball in college, so she started her basketball career young.

Basketball, however, isn’t the only activity that consumes Whiton’s life. She has been a very active member in her surrounding community. She has stocked shelves at the Perry Food Pantry and served food at the Perry Soup Kitchen.

Whiton has also worked at a Des Moines homeless shelter as well. Her most recent contribution to her community has been by volunteering at The Village in Indianola.

“I really did enjoy going to The Village to help with things,” Whiton said. “I met some nice women that had experienced a lot and who just wanted to talk.”

Whiton believes community service is very important because some people really need the help and others just love the company.

Nicolle Whalen, assistant women’s basketball coach, believes they are very lucky to have such an all-around great person on the team.

“Kate is an extremely talented person,” Whalen said. “She works very hard and always brings an intense and powerful presence to the court. Off the court, she is just as wonderful.”

Whalen commented how Whiton has a very strong work ethic on the court and in the classroom, and is just a great person to be around.

Brian Niemuth, head women’s basketball coach, remembers when he first met Whiton. She told him all she wanted to do was be successful. He believes that has tied this motto into everything she has done.

“She really dives into everything,” Niemuth said. “I think that’s what separates her from everyone else. She’s truly been a joy to coach.”

Whiton led her team to the National Collegiate Athletic Association tournament for the fourth straight year. The Storm made use of a home-court advantage in the first two rounds of the tournament.

Simpson proved dominant on March 7 over Gustavus Adolphus, despite an initial scare. After missing 16 of its first 22 shots, the Storm came back to force 15 turnovers on the Gusties in the first half. Although the Gusties fought in the second half, Simpson prevailed with a score of 73-64.

The Storm advanced to the Sweet 16 after defeating the University of Wisconsin-Eau Claire 70-63 on March 8. Once again, Simpson led at halftime. After Simpson’s 20-4 run early in the second half, the Blugolds tried to respond by bringing their deficit down to five, but to no avail.

In their third and final game of the NCAA tournament, the Storm fell to UW-Whitewater 96-69. On a foreign court, Whiton still led all scorers with 29 points. However, the Warhawks forced 22 turnovers on the Storm and nabbed 15 steals, as well as scoring 60 points in the second half alone. This marked the second year in a row that the Storm made it to, but not past, the Sweet 16.