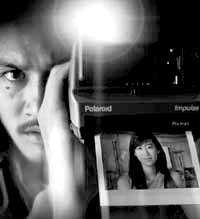 If suspenseful music, jumping at the slightest movement and screaming is your thing, then “Shutter” is a movie for you. I haven’t covered my eyes so much at one movie ever!

The story starts out with newlywed couple Jane, Rachael Taylor (“Transformers”), and Ben, Joshua Jackson (“Mighty Ducks,” “Dawson’s Creek”) cutting the cake at their wedding with lots of pictures being taken.

The couple then makes a journey to Japan where Ben has a job as a photographer. While driving to their cabin, Jane hits a woman. This is where the movie starts to get weird.

There is no body found and everyone assumes Jane actually hit an animal, not a person. However, the woman Jane supposedly hit starts haunting the newlywed couple. She turns up in every aspect of their lives- their apartment, on the street, and in their photographs, something known as a spirit photo.

The story then becomes a hunt for who this woman is and why she is appearing everywhere. At first, it seems to be a backlash from the accident, but then it turns into something much more.

People start getting hurt and dying, and then all sorts of facts start turning up.

Jane discovers that Ben actually knew the woman and had a long-term relationship with her that ended badly. After a failed attempt at breaking up, Ben and his friends take matters into their own hands. The story then turns into a personal mission for Jane to discover the type of person she has marriedand what secrets he has buried in his past.

While the story flows nicely, the audience is left with some questions at the culmination about how certain things ended up. It also brings up interesting things about the paranormal and raises questions as to whether or not spirit photos actually occur and what they mean.

If you’re looking for a good scare, this movie will certainly do the trick. The soundtrack is incredible, creating suspense at just the right points. It keeps the audience on its toes and plays with your head. You want to look away but you can’t.

There are scenes of just bright flashing lights and brief glimpses of people which cause confusion and a desire to know what is going on. The movie drags you in by releasing facts sporadically throughout the plot.

If suspense and horror are what you’re looking for, “Shutter” is the movie for you! Just be prepared for your heart to skip a beat or two.