Campus Day intramural kickball helps round out day of service 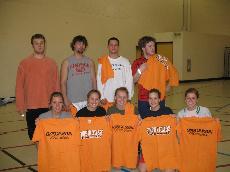 From approximately 12:45-5:00 p.m. on Wed., April 2, there will be an intramural kickball tournament located at the intramural fields. The kickball games will take place after the normal Campus Day activities.

Director of Intramurals Nicole Darling has been at Simpson for eight years. Darling says that kickball has been the main intramural event for the last three or four years.

“We used to do a lot of different activities such as dizzy bat races and pie eating contests,” Darling said. “Attendance for those activities just wasn’t very good.”

Darling said that there really isn’t much of a connection between the activities taking place in the morning on Campus Day and the kickball game, but that the game is more of a chance for those who participated in the morning’s activities to unwind with a little friendly competition.

“They wanted some type of recreational activity to keep students doing something for the day,” Darling said. “They work hard all morning doing different activities for the community and then the recreational aspect is something relaxing to do as a team or a group.”

Darling said last year there were around 11 teams made up of 10-12 players. This year, she expects anywhere from 80-100 students to participate in the kickball tournament.

One of those participating is freshman Aaron Sewell. Sewell says that it will be fun to play a game that he hasn’t played since he was younger.

“I played kickball a lot with my brothers in the backyard as a kid and we always had a lot of fun together,” Sewell said. “Kickball is just such a fun game to play. I really can’t turn down an opportunity when it’s there.”

Sophomore John Wolfe echoed some of Sewell’s comments, saying that the game will bring back some memories of childhood. Wolfe added that the game also gives students a chance to get away from schoolwork for a day.

“Kickball is appealing because it’s fun to play with all of my friends,” Wolfe said. “It’s just like back in elementary school because everyone is included. It really helps people to relax during a time where papers and tests are becoming frequent.”

Andy Conyers, junior and Intramural Council member, added that the kickball game is just a fun way to round out the activities on Campus Day.

“It’s just fun to have a day off of classes and just get the free time to go out there and get some exercise,” Conyers said.

Sewell said that his Campus Day activities in the morning paired with a fun game of kickball should make for a great all-around day.

“Having the kickball game after morning activities is a good way to unwind and free up my mind,” Sewell said. “It’s like an all-purpose day for me, I get to give to the community and compete with others all in one day. It’s awesome.”