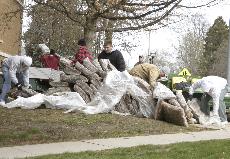 On April 2, the 87th annual Campus Day will be held at Simpson. It is a tradition that has been taking place since 1911.Campus Day is a time for the student body to help the campus and community.

According to senior Courtney Swanson, Campus Day is a good time for students to come together and help provide the area with a clean atmosphere.

“It’s fabulous because it connects us with the community,” Swanson said. “It is about serving, so it is not about what you gain but what someone else gains.”

It used to be that Campus Day was a time students cleaned the campus only, but in 1988 students started working in the community surrounding Simpson as well.

Campus Day was started in 1911 by the student body after they voted to suspend a day of classes to devote to cleaning up the campus and the buildings. The faculty had no idea the event was happening until they arrived at their classes to teach and there were no students present.

Following the very first Campus Day, which was called “clean-up day” at the time, Simpson decided to continue the tradition. The years following, teachers and students alike all became very involved.

The hope of the very first group of students was that Campus Day would become an annual event for the future, which is what it has grown to be.

Senior Heather Gaffey has been a chair for this event for three years now. She was very impressed with last year’s turn out for involvement in Campus Day, and hopes it will continue to grow.

“Last year we had an excellent turnout,” Gaffey said. “[It was] the biggest yet and it went very smoothly for the campus.”

There are various teams that get involved in this occasion, including teams consisting of everyone from alumni, faculty members, various teams from athletics, woman’s resources and interfaith.

According to sophomore Allison Johnson, her experience from last year was very positive. She benefited from the experience and was happy to be able to make a difference.

“The Simpson community came together and put a good name out there for us,” Johnson said. “We went out into the community and helped other people. It is always good to help others out.”

Campus Day used to be a day that was not announced until the morning of the actual event.

According to Gaffey, the date that Campus Day is going to be held now has to be announced and prepared well in advance to fit people’s schedules so they can prepare themselves for this event.

“It used to have more of a surprise element, but now due to logistics, students know when the day is,” Gaffey said. “That way faculty members can prepare and adjust their syllabus accordingly.”

Many believe that it is important to uphold the tradition of campus day because it is a tradition that has been around a long time.

According to senior Emily Salberg, senior class president and another chair of the event, Campus Day is a day filled with fun activities and it is important to the community.

“It’s been a long-standing event on campus for a number of years” Salberg said. “It’s a chance for Simpson to give back to campus and to the community for a fun day of volunteering with no classes.”

Campus Day has a long custom of having fun activities implemented in the course of the day. It used to be that the campus would hold mock chapels and picnics. They later went to such events as Frisbee, fishing, dances and live band performances.

This year there will be an intramural kickball game held after lunch that teams from Campus Day may participate in. Students are also going to receive free shirts for their hard day’s work if they sign up for a team in time.

Lindsey Hunzelman, assistant director of campus activities and Greek life coordinator, hopes that Campus Day will receive a good turnout just as it did last year and people will realize the importance of this day.

“I hope we get as big of a turnout as last year if not more,” Hunzelman said. “It has been a tradition that has been around for so long, I just hope that the campus embraces that and comes out and gets involved.”