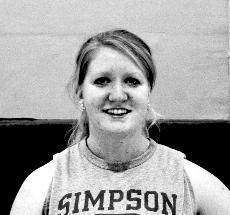 “It’s exciting to have so much success with a young squad,” Cleveland said. “As a coaching staff, we have seen the team come together over the last year and show great promise.”

Cleveland guided the women’s team to a second place finish and the men to fourth at the conference indoor meet, both up four spots from their respective finishes last year.

On the women’s side, Stacy Bonertz qualified in the weight throw and Lauren Bucklin did so in the 55 meter hurdles. Freshmen Catie Ellingson also provisionally qualified in the 800 with a school-record time of 2:14.35 at the Iowa State Last Chance Meet on March 8.

Qualifications or not, Patten likes what he sees from his teammates.

“The track program is moving in the right direction,” Patten said. “We are all making improvements individually and as a team.”

Rounds agrees with Patten, emphasizing the magnitude of the conference finishes.

“This is a big deal for us,” Rounds said. “A lot of people have stepped up and are competing.”

For Rounds, qualifying was a product of hours of hard work.

“The goal is to push yourself as far as you can go,” Rounds said. “I’ve always dreamed of running in the national meet.”

As for Patten, qualifying came while focusing on the bigger picture.

“I was concentrating on placing well to get points for the team, but I just happened to place well and run a good time,” Patten said.

For Bucklin and Ellingson, provisionally qualifying was just the beginning. Both made the performance list, meaning that the pair would get to run in the national meet.

On Friday of the national meet, the duo qualified for finals in their respective events. Bucklin ran an 8.32, lowering her own school record once again and putting her in seventh in the prelims.

Ellingson clenched the eighth and last spot for finals, running a 2:15.17. On Saturday, Bucklin and Ellingson each earned All-American Honors. Bucklin came in eighth with a time of 8.38. With a time of 2:16.18, Ellingson grabbed fifth place.

The accomplishments of his young teams, in which Cleveland estimates that 48 of the 55 members are underclassmen, he believes have made a statement.

“All of a sudden people have to start thinking about us and not take us for granted,” Cleveland said. “They recognize we are for real and it’s exciting.”

In his third year as head coach, Cleveland won the Conference Coach of the Year on the women’s side of the indoor season. However, he was quick to praise his team, calling the award more of a tribute to his entire coaching staff and especially his athletes.

“I feel like we have quality individuals in all events that can score points,” Cleveland said. “The coaches look a lot better when the athletes perform the way they have. But it doesn’t happen one without the other.”

Also was Cleveland swift to mention the work on and off the track his few senior athletes have done in order to get the program to where it placed at the conference meet.

“The upperclassmen have been great role models and leaders for the underclassmen,” Cleveland said.

The team has now begun the outdoor season and both coaches and athletes are fired up to build on the momentum they gained from the strong finish to the indoor segment.

“It’s a great springboard into the outdoor season,” Cleveland said.

Rounds was especially optimistic for the outdoor season.

“I’m looking forward to taking it one day at a time and just waiting for the warm weather.”