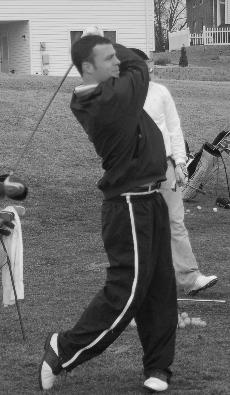 With the temperatures finally rising and snow quickly dissolving, the men’s golf team is in full preparation for their first competition at the Webster Invitational in St. Louis, Mo., on March 30-31.

Larry Shoop, head men’s golf coach, is in his sixth season as head coach. He led the Storm to third place last year at the Iowa Intercollegiate Athletic Conference. This was the team’s highest finish in the conference in five years.

“I think we are headed in the right direction to compete for a conference title,” senior David Combs said. “Guys were able to get a lot of experience this past fall, so I am looking forward to see what we can do.”

Combs mentioned that he thinks they are one of the top three teams in the conference this year and should have as good a chance as any of the other teams to compete for the conference title.

The men’s golf team traveled to Las Vegas over spring break where they were given a lot of time to practice and sharpen their skills.

“It was a lot more competitive than in years past,” Combs said. “We were able to practice on the range in the mornings, and then we played 18 holes in the afternoons competing against each other.”

Combs believes being a part of the golf team has been a very enjoyable experience because he gets to compete with a great group of guys every weekend.

“The chance to travel and play some good courses against solid competition really makes you bring out your best,” Combs said.

Senior Cody Scharf is also looking forward to this upcoming season because the team has set some high goals and they have a strong core returning from last year.

“I’m looking forward to seeing how we do this year since it is my last,” Scharf said. “As a team, we want to win conference and a trip to nationals.”

Scharf has set individual goals for himself as well and hopes he can take top 10 honors at every meet.

Sophomore Brett DeNeve is another excited member of the men’s golf team because he feels the team can achieve great things this spring as well.

“The team is really close, and I enjoy being with them,” DeNeve said. “I am looking forward to the conference tournament and winning it as a team so we can go to nationals.”

DeNeve admitted that it will take a lot of work from the team now until the tournament, but he believes the team is capable of reaching the goal.

“We are all friends and try to help each other out during season and offseason,” DeNeve said. “We have a good time together whatever it is we’re doing.”

The men’s golf team has been practicing at Echo Valley and The Legacy golf courses in preparation for their up-and-coming season. The Las Vegas trip presented the golfers with some challenging golf courses and intense competition amongst themselves, but now they will get to put their skills to use as they travel to St. Louis for their first meet.