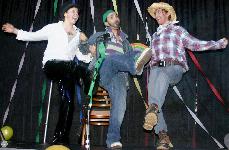 The fifth annual drag show was held April 9 in the BSC gallery at 8:30 p.m.

The event was put together by LGBTQA and the show was hosted by professional drag queen Selena Sakowitz. This year’s tagline was “Babes in Toyland.”

Students were encouraged to make donations while at the show, all proceeds going to the AIDS Project of Central Iowa.

CoryAnne Harrigan, associate professor of English, LGBTQA adviser, was happy to give the Simpson community the opportunity to attend a drag show.

“Most Simpson students have never been to an actual drag show, which is a fairly important social event for many gay people,” Harrigan said. “The LGBTQA drag show therefore gives students the opportunity to see what a drag show is like, and even to participate in, if they feel comfortable.”

Harrigan went on to talk about the benefits of the show at Simpson.

“The show might help some people see that gay people aren’t scary and that they aren’t out to convert anyone. They’re just having a good time, and in some sense, through a drag show, they’re showing that they have a sense of humor about themselves.”

Last year’s winners, seniors Laura Meihofer and Liz Norton, are coming back this year with a new routine and a new member. Senior Ali Halvorsen will be joining the pair for a routine that won’t be revealed until the night of the show.

“It’s a surprise this year,” Norton said. “It will be a little bit different of a genre than last year, but we just want to keep it a secret. We will have to step it up a bit because you have to be better than your best.”

Last year Meihofer and Norton performed to “I’m too sexy” by Right Said Fred, which gave the two the honor of winning and knowing their fun goes towards a great cause. The two also won a $100 grand prize.

“It’s for a great cause for AIDS and everyone at LGBTQA works really hard,” Norton said. “We won the pride of knowing we won and we worked really hard.”

Meihofer believes the drag show is a great event for LGBTQA to become more recognized on the Simpson campus.

“The drag show for some people can be very in your face, but at the same time fun and light-hearted,” Meihofer said. “I really enjoyed participating in it last year and giving people a real shock. Last year everyone thought that Liz and I were really men and I loved it and this year we will be adding Ali to our group and I hope to really do some becoming moves.”

“I think that the drag show is a great opportunity to express yourself in a variety of ways and to essentially embrace diversity,” Halvorsen said. “It’s an event that sends a positive message to the spectators and is enjoyable at the same time.”

When asked about the routine, Halvorsen maintained the secret.

“All I can say about our routine without giving anything away is that it will definitely be worth coming to the drag show to see some inventive stunts!”