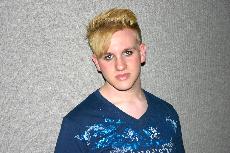 Growing up in Indianola most of his life, junior Jacob Kaufman originally came to Simpson for convenience.

“I graduated from high school in three years and my freshman year of college was more like an extension of high school, but I ended up staying,” Kaufman said.

Whether he is posing for the camera or playing a character in a play, Kaufman is able to shine in the spotlight.

“I’ve been performing in the theatre since I was in third grade,” Kaufman said. “It’s ingrained in me and I can’t imagine doing anything else with my life. Secretly I would love to be a jazz singer, a plus size model or a kept man. Who doesn’t want to lay in a bathtub drinking martini’s and watching soap operas all day?”

This fun, carefree attitude has made Kaufman a star not only on stage, but to many others as well.

Looking back on his theatre career at Simpson, his favorite role was Jack in Sondheim’s musical, “Into the Woods.”

As a theatre major, Kaufman loves acting but there have been a few glitches along the way.

“I had a problem with being miscast as military personnel,” Kaufman said. “I don’t know how that happened.”

While Kaufman has grown a lot as a theatre artist, college has also taught him many life lessons.

“Don’t do anything just because it’s what’s expected of you,” Kaufman said. “Inside you always know what’s best.”

Kaufman has learned a lot from his time here and when asked for a few words of wisdom, he had this to pass along.

Kaufman would like to sum up his life’s motto in one quote.

“An amazing woman on Taxicab Confessions once said, ‘I’ll tell you what. What doesn’t turn me on makes me laugh. So… how can I lose?’ It’s perfect.”