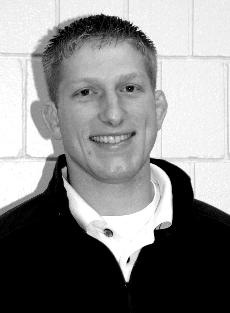 The Simpson wrestling program has a new chief. After a committee interviewed several candidates on April 4, Athletic Director John Sirianni announced Clint Manny as the new head wrestling coach. For the rookie coach, the promotion caused a stir of emotions.

“I’m excited first of all,” Manny said. “I’m also kind of nervous with the amount of responsibility that comes with being a head coach.”

Manny was promoted to replace Ron Peterson, who resigned in March. Manny served on Peterson’s staff as a student assistant for one year and a full-time assistant for two. Manny is eager to get started and to make a statement with his own program.

“My goal is to restore the tradition the Simpson program has had in the past,” Manny said. “We are competing for a national championship and anything less isn’t good enough. Until we are winning and I accomplish something, I won’t be satisfied.”

Just as Manny is excited to continue to build the Simpson program, his athletes are also eager to get started.

“I am happy and excited because there is a known feeling,” junior wrestler Ben Hektoen said. “We are ready for a change of the system and the way things are run.”

Having had Manny on staff for the last three years is an advantage for the team rather than having a completely new coach, even if Manny decides to shake up the system a little bit. Just having the prior relationship is a big benefit, according to Hektoen.

“[Manny] has a personal interest in everyone on the team as long as you give him everything you got and are willing to work hard,” Hektoen said.

“He doesn’t breathe oxygen,” Hektoen said. “He breathes diesel fuel. He is a machine.”

Sirianni has as much confidence in his new head wrestling as anyone but also understands the obstacles Manny will face in taking over the program. Sirianni acknowledges Manny has the first step out of the way because Manny already has established relationships with his athletes.

“His first challenge will be to instill his personality and expectations into the program,” Sirianni said. “He brings excitement and enthusiasm and we are thrilled to death to have him as our next coach.”

Manny is the all-time winningest wrestler in Simpson history with a record of 148-24, eclipsing the old mark of 146 by winning three matches in the 2005 NCAA Division III National Championships. He was a three-time All-American at 149 pounds, a national runner-up as a junior and a senior and spent his entire senior season ranked first in that weight class. He was named Most Outstanding Wrestler of the 2004 Division III National Wrestling Coaches Association Duals.

Sirianni considers Manny’s illustrious career as another bonus he brings to the table as the new leader of the Storm, especially for the recruiting trail.

“Clint had a great high school experience and a great college experience,” Sirianni said. “He is well-known in wrestling circles and well-respected.”

For Manny, a native Iowan, becoming a college head coach has always been his ultimate goal. To say Manny is looking forward to his new job is an understatement.

“We have a great core group of guys already,” Manny said. “I want to watch the program grow and the guys become successful. It will happen, it’s just a matter of time.”