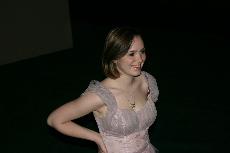 The five plays at this year’s performance include “A Kind of Alaska” by Harold Pinter; “Play” and “Act Without Words II,” both by Samuel Beckett; “The Hero” by Arthur Kopit; and “The American Dream” by Edward Albee.

The plays were all organized by the senior theatre majors enrolled in the senior seminar course.

“Every year, there is a different topic,” senior Kelsey Hedrick, a theatre major, said. “The shows center on a common theme, so every year there’s something new.”

Senior Mackenzie Webb said the process was initiated by the faculty, but the students were responsible for the specifics.

“The faculty met last year and decided the theme of the senior seminar class as well as the festival should be ‘Theatre of the Absurd,'” Webb said.

Hedrick said students in the class then had the task of deciding which plays were to be performed.

“The four seniors did extensive reading within the genre,” Hedrick said. “We chose shows we thought worked well on stage and had something to say.”

Once plays were decided upon, the students were assigned roles. Webb said her role is one that she will be doing for the first time.

“I’m directing ‘A Kind of Alaska’ by Harold Pinter and ‘Act Without Words II’ by Samuel Beckett,” Webb said. “This is my first directorial project, but everything I’ve done with Theatre Simpson in the past four years has prepared me for this.”

Webb said her experience includes acting in two past festivals and working as stage manager in another.

The seniors were aided in the festival by other theatre majors, including junior Jacob Kaufman, the costume designer and wardrobe master for the entire production. Kaufman said working on all the productions was a challenge.

“I think it was taking [five] different and complicated shows and designing them on a small budget,” Kaufman said.

However, Kaufman also added that working on the plays allowed him to be creative.

Sophomore Candace Zak, makeup designer, also described her job as being both challenging and rewarding.

“Taking ideas from the director’s concept and trying to portray them in my head was hard, but at the same time it was fun,” Zak said.

Participants involved in the production believes the festival will be an interesting experience, and recommend that all Simpson students take the time to attend at least one of the three performances.

Webb added that the festival will make everyone who sees it more open to different things.

“Audience members should get a good taste of the ‘Theatre of the Absurd,'” Webb said. “I’m hoping people will leave the Festival with broader horizons than when they entered.”

Webb also said the play will make people more aware of their world.

“I think that everyone should come because there are free tickets for students and faculty,” Webb said. “This is never going to happen outside of college. It will also be a great cultural experience.”

“I would say that this is a very exciting festival and anyone who sees it will have a very unique theatre experience,” Hedrick said. “This is so unlike any show I’ve seen at Simpson in my time here.”

Theatre Simpson’s Spring Plays Festival 2008, ‘Theatre of the Absurd,’ will be performed on Friday and Saturday nights at 7:30, and Sunday afternoon at 1:00. Tickets are free for any Simpson student or faculty member.