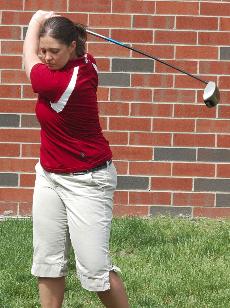 As the women’s golf team begins their spring season, they take the course with only five members working to improve individually and to stay positive.

The lone upperclassman of the team, senior Noel Treibel, says the team is working to maintain their place in the conference this season.

“Our goals for this season are to improve our own scores and play as a team,” Treibel said. “We know we can compete with the top teams and we’re hoping to hold our reputation in the conference. Our expectations are to keep moving forward as a team and individually, along with winning some tournaments.”

Sophomore Katie Vaux says the spring season is an opportunity to work on skills and enjoy the game.

“Even though this is not our biggest season, it is a good time, when we are competing, to just go out there and work on having fun,” Vaux said. “I look forward to finally getting outside on the course to work on the areas that I don’t feel very confident about.”

One area of concern for the team this spring is their low numbers. With only five women, everyone plays and is counted on to contribute to the four lowest scores for a team total.

Sophomore Megan Smith says having only five women adds to the difficulty of the game.

“It’s tough only having five and knowing your score has to count every time,” Smith said. “We play five and count four scores, so it’s a lot of pressure.”

However, Treibel believes the there are benefits to having a smaller team.

“Having just five girls on our team makes us that much closer,” Treibel said. “We all work really hard during our seasons and everyone knows everyone’s swings, which gives us the advantage to help each other improve more.”

Bob Darrah, head women’s golf coach, also believes the low numbers, which have been around six for the past five years, also unifies the team and adds to the competition within their team.

“They pull together,” Darrah said. “You almost look at it as a natural survival thing where there is competition for the position. There is no emphasis on it but you have to play well each time with only five girls.”

Another factor affecting the team is their youth, as the team has two freshman, two sophomores and only one senior.

Vaux thinks the lack of upperclassmen adds to the competition.

“It really doesn’t affect the season all that much, but it can have an affect on your attitude knowing there is a lot of pressure to do well,” Vaux said.

Although the women only began practicing recently, they were able to get a head start with a spring break trip to Las Vegas. They took advantage of the weather to refresh and improve their skills on the driving range while also playing full rounds on different courses.

“It was an opportunity to be outside and play,” Darrah said. “We played on some nice courses and it was a good trip.”

The Storm’s first meet is April 6 and 7, against Loras, in Dubuque.