Goodwill Fashion Show gives back to the community 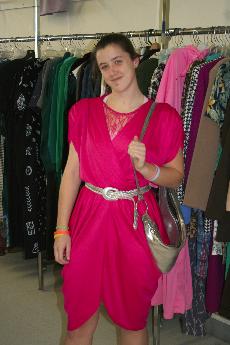 For the fourth year, the Simpson College chapter of Public Relations Student Society of America will be putting on a fashion show sponsored by Goodwill.

The event began after students in PRSSA took a trip to New York to see the national conference and witnessed a fashion show sponsored by the organization.

“We thought the idea of a fashion show might be interesting, so we brought it to campus,” senior Emily Salberg said.

After going around to various locations in order to find an organization willing to have their clothes modeled, the students in PRSSA focused on Goodwill.

“When we asked, they were willing to help, and we ran with it,” Salberg said.

The next step involved finding the models for the show itself. PRSSA decided an interesting idea would be to find people from various campus groups to model the clothes.

Senior Jessica Ellingson was in charge of finding the clothes for the models to wear.

“We tried to get a variety of groups represented,” Ellingson said. “We would meet at Goodwill to get outfits for everyone.”

Junior Kyle Liske, student body president, will be one of the models at tonight’s fashion show.

“Emily Salberg and Jessica Ellingson asked me and I agreed to it,” Liske said.

Liske said he will be modeling a fur coat with leopard-skin pants.

“[I’m looking forward to] just having fun and being able to show off that sweet coat,” Liske said.

“According to our Facebook group, we have 120 people who said they will attend,” Salberg said. “Each year, we’ve increased turnout, which is awesome.”

Salberg also stated that a lot of work is involved in putting the show together.

Ellingson said she has had several challenging moments while working on the show.

“A lot of it goes with advertising and promoting the event,” Ellingson said. “On my end, it’s trying to get 32 people to Goodwill and finding outfits for them.”

Ellingson also said there are also many rewarding experiences.

“It’s exciting when you have somebody who likes their outfit,” Ellingson said. “It’s cool when somebody says, ‘I’ll buy this outfit.'”

The only requirement for attendance at tonight’s show is they bring one item of clothing or a household item.

Salberg said she enjoys working on the event, and said it helps out in many ways.

“I adore it and have become really fond of doing it every year and with CAB helping us out,” Salberg said. “It’s been a lot of work and I think it’s a great opportunity for us to get our name out there, getting publicity for Goodwill and it’s a good resume builder. I’m hoping it’ll become an annual tradition from here on out.”

Ellingson said she is also proud of this year’s show.

“There is not an outfit that I wouldn’t wear personally,” Ellingson said.

The PRSSA Goodwill Fashion Show runs tonight from 8-10 p.m. in the BSC.