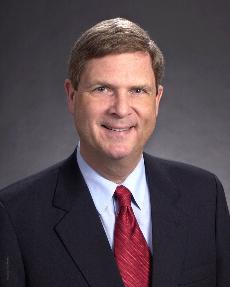 Griffith said the process used this year to select the commencement speaker is the same process as last year. That process was determined by President John Byrd.

“What happened this year is that we looked over the list of folks that was created last year and then went down the list and added names that we thought might be possible,” Griffith said. “We talked about the loose criteria that exists for the commencement speaker and then I think that in both last year and this year, the committee gave deference to the students because the commencement speaker really in some measure is speaking to the students.”

Griffith said the committee worked to find a speaker who would appeal to the students and who didn’t have a political agenda.

“Both this year and last year, we hoped to find someone who really had a message for students,” Griffith said. “In this particular choice, it’s my understanding that the students were not crazy about having a sitting politician or someone running for office, especially this year when there are so many politicians coming through, that people are thinking we don’t want people to use this opportunity for their own advantage.”

Vilsack’s name came up fairly quickly in the process due to the fact that he was the former governor.

“It was brought to the attention of the group that it has been the policy in the past to invite the former governor of Iowa right after he has left office,” Roberts said. “It’s been done with governors prior to that including Robert Ray and Terry Branstad. I think that, in the end, it was ultimately decided that we were going to extend the offer to Governor Vilsack and he accepted.”

Roberts said the benefit of having former governor Vilsack speak at graduation is that Vilsack is a fairly famous name both in Iowa and on a national level and will have a message that will appeal to the graduating seniors as well.

“Here I think you’ll get a guy that is a very good speaker and somebody that isn’t going to be out there stomping a political agenda but somebody who’s going to out there talking about graduation and what students can do for their future,” Roberts said.

Liske also believes that Vilsack is a good choice for the commencement speaker.

“I think former governor Tom Vilsack is an excellent choice for a speaker,” Salber said. “Simpson has a tradition of asking former governor’s to speak at graduation ceremonies following their leave of office and we wanted to uphold that tradition. Former governor Vilsack is also an excellent speaker and we feel would have great advice to our graduates on making an impact on the real world that they are about to embark upon. I am very happy with our final choice and that he has agreed to be our 2008 Commencement Speaker, it’s a good fit.