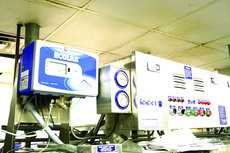 According to Byrd, the most important aspect of the Presidents Climate Commitment is that Simpson has agreed to attain climate neutrality.

“I think that the goal that we have within the Presidents Climate Commitment is the highest and most difficult goal, and that is becoming climate neutral at a date in the future,” Byrd said. “And that means no net greenhouse gases by the date that we will establish as part of this process. That’s a significant goal, and it will take great effort over the next decade or so to reach it.”

Byrd said that Indianola mayor Jerry Kelley, executive assistant to the president, was brought on to help in the area of sustainability.

“Primarily, we brought Jerry on board because he has a real interest and passion for this area,” Byrd said. “It turns out that he was also the mayor of Indianola. I think one of the advantages that we will have is that he will be in a great position to see where there are opportunities for us [Indianola and Simpson] to cooperate and where there may be an opportunity to combine our resources and energies in a way that we can get a bigger and better payoff that we wouldn’t otherwise get if we were just doing things separately.”

Kelley said that by working together, Simpson and Indianola can help bring passion and academic expertise to the entire community. He also said that both need to work together in their efforts to go green.

Byrd said that Kelley’s primary responsibility will be working part time for the college, providing oversight to the recycling project and to the implementation of the Presidents Climate Commitment. He will be also be working with the Sustainability Committee, which will help provide direction to Simpson’s many sustainability efforts.

Kelley said that there are three parts within the Presidents Climate Commitment.

The first states that Simpson needs to have a structure in place within the first two months, in which the campus is going to address their climate commitment.

Simpson will then draft one and two-year goals for how Simpson plans to attain climate neutrality.

“In the next few months, we’re going to get the structures in place so that we can begin collecting information to create our current baseline of energy consumption and carbon emissions,” Kelley said.

According to Byrd, one of the most recent projects was a geothermal heating and air-conditioning system that were installed in Clinton apartments. The system was installed in half of the building and is an energy efficient way to heat and cool the building.

Byrd also said that another area Simpson is looking at is transportation, including transportation for employees to and from Des Moines.

Ryan Rehmeier, assistant professor of biology and environmental science, said that the Environmental Awareness Club was started last year for the idea of promoting sustainability on campus, as well as in the Indianola community.

The student-run program started a recycling program in the spring and hopes to expand that program to the entire campus. The club also participated in highway clean-up and adopted a two mile stretch of highway between Indianola and Des Moines. In the coming year, Rehmeier hopes to get involved in other projects beyond the scope of recycling.

“Some of the ideas that have come up in the past year were the idea of maybe working to have an organic-type of garden, a more sustainable type of garden to display to people how they can do gardening in a sustainable fashion,” Rehmeier said. “We’ve also talked about improving compost here on campus-using the food waste from places like Pfeiffer and the Grill and helping to turn that into compost that could be utilized in landscaping here on campus.”

According to Byrd, students have shown enthusiasm for a variety of green initiatives.

“I think that student involvement, input and enthusiasm will be extremely important if we are going to be successful,” Byrd said. “From the educational perspective, it will absolutely be vital that students be involved in this so they learn more about the environment and how to protect it.”

Rehmeier said students need to know what’s going on in the environment in order to help preserve it.

“Students need to be made aware of environmental issues because they are impacted by these issues every day,” Rehmeier said. “Our students are inheriting this world and should at least have some idea of what needs to be done so that we can lead enjoyable lives now and ensure that future generations have the ability to lead similar lives.”

Senior Andrew Wingen, treasurer of the EAC, also agrees that everyone needs to be aware of environmental issues.

“Environmental issues are important because we are very much a part of the environment,” Wingen said. “We may seem to be insulated from it, but ultimately, we are tied to it in many respects.”

Byrd said that Simpson is just getting started in their initiatives to go green.

“We’re really on the cusp of, I think, a lot of change,” Byrd said. “We’re at the start of really getting Simpson College involved in these various sustainability initiatives, and it’s going to be very exciting. I’m very committed to making sure we follow through and that we accomplish the goals that we have set out to meet.”