Not your average summer camp 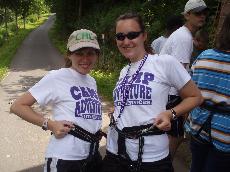 Last summer, while many college kids were basking in the sun or working as interns in a cluttered office, four Simpson students went overseas to participate in a program called Camp Adventure.

Camp Adventure sends American college students to military bases in the U.S. and all over the world. The students act as camp counselors for kids whose parents are stationed at that base.

Junior Jessie Eilbert and senior Kurt Fogleman were stationed at the same base in Germany, while junior Jaclyn Westphal and sophomore Abby Weers worked in Japan.

Several different types of camps are offered through Camp Adventure, including aquatic, sports and day camps, which are similar to typical summer camps. Another program offered is Camp Army Challenge, a residential camp for older kids who have at least one parent deployed.

Westphal and Weers worked at aquatic camps, while Fogleman and Eilbert were at a Camp Army Challenge.

Camps are located in 27 different countries all over the world, so counselors have a say in where they want to go.

Eilbert and Fogleman were stationed in Germany and were able to visit nine different countries during their free time.

“With Camp Adventure, you’re completely immersed in another culture for three months,” Eilbert said. “It’s way cheaper than what you would pay to spend three months overseas any other way.”

The lifestyle overseas was not the only cultural difference that seemed foreign to the college students.

“We really were exposed to what the U.S. military does day in and day out,” Eilbert said. “They are forced to uproot their families and take them to another country to protect our freedom. It was really interesting to get to work with them.”

For the kids in military families, Camp Adventure was a fun break.

“With Camp Adventure, you have the opportunity to make a big impact on a child’s life,” April Goers, director of Students Support Services and Camp Adventure alumna, said. “That summer, they may see you more than they see their parents.”

Working at Camp Adventure is not a paid position, but students make a living stipend that covers all lodging, travel and some meals.

“It’s an amazing opportunity that you can’t put a price on, but students shouldn’t think that they are going to make any money,” Goers said. “Once you add up all of the experience, the 12 college credits and the travel, it’s worth all the time and money you put into it.”

In the program that Eilbert and Fogleman participated in, 20 counselors spent ten weeks living together in one barracks, working together every day and traveling everywhere together.

“We came from all different walks of life, but we had shared experiences, both working with the kids and traveling,” Fogleman said. “You get to know someone really well when you’re traveling all over Europe with them.”

Goers made life-long frineds through the experience.

“I became friends with a girl my first year at camp, and we are still friends,” she said. “In fact, we were in each other’s weddings.”

Camp Adventure is growing rapidly as more programs are offered and more students begin to participate. For instance, when Goers went eight or nine years ago, 300 college students participated. This year, over 900 students were involved.

Over 11,400 college students have worked with Camp Adventure since it began in 1984. However, even with so many students participating, the program is always in need of more people.

To work at Camp Adventure students must be enrolled in college as either an undergraduate or a graduate student.

Goers estimates that 90 percent of applicants are accepted.

After being accepted into Camp Adventure, each of the students participated in a training program in Ames. The program lasted throughout the spring semester of last year, and the students carpooled to Ames for a few hours every Thursday night. A training session is also held for a week in May. At this time, students spend five or six days getting trained from morning until night.

College students can work as summer counselors, do internships in the spring or fall or work through a shorter program over Christmas or Spring Break.

“Each student gets 12 college credits for participating in Camp Adventure, so the training is equivalent to a college course,” Goers said. “The class basically consists of learning songs, games and skits. It’s nothing like lecture.”

Camp Adventure may sound like fun, but everyone comes back with their own experiences from it.

“Camp Adventure is a really great experience, but it’s not for everyone,” Weers said. “You have to really like to work with kids and enjoy traveling.”

The students who participated in Camp Adventure plan on sharing their experience in a display at the BSC.