Consistency will be key to success for women’s golf 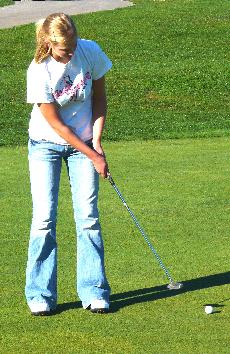 The Storm golfers are led by Bob Darrah, head women’s golf coach. This season marks Darrah’s 20 year at the helm of the golf program, and his 50 year as a coach.

During his tenure with the Simpson golf program, Darrah has led the Storm to nine Iowa Conference titles and has been named the conference’s Coach of the Year eleven times. Under Darrah’s leadership, Simpson has been represented at the national tournament on 15 different occasions by at least one golfer. The most recent of those occasions was when Vaux qualified in 2007.

“It was fun to be a part of nationals and see the higher level of competition,” Vaux said.

“Coach [Darrah] is a great coach, not only with our swing, but with our mental game as well,” junior Megan Smith said. “We are strong as a team because we have a good coach.”

Darrah is also excited about the direction of the program. In a recent presentation Darrah gave to a number of students and members of the athletic department staff, he pointed out that his golfers have the tools to succeed.

“My girls can hit the ball, no problem,” Darrah said. “If we can get them to stop thinking and play the game, they’ll be as good as gold.”

The team is anchored by juniors Katie Vaux and Megan Smith. Both Vaux and Smith are trying to carry on the rich tradition of success here at Simpson.

The duo is joined by returning sophomores Chelsey Manny and Kayla Miller, and the Storm welcome freshman Taylor Hillery to the links.

Smith, the team leader, is excited about the quintet and is looking forward to getting the season underway.

“Our freshman has shown a lot of potential, and our returning sophomores have already shown much improvement from last year,” Smith said.

During this first part of the season, the women are working to stay consistent with their swings and are trying to shoot low scores. Smith believes that consistency, coupled with last season’s fourth-place finish at the IIAC tournament, is enough to catapult the team to a top-three finish in October.

Smith went on to say that the team’s ultimate goal every year is to qualify for nationals by winning the conference tournament, and this year is no different.

The women have good reason to be excited. In their first outing of the season on Aug. 29, the Storm finished second in the team standings at the Mount Mercy Fall Invitational. Simpson boasted two golfers with finishes in the top 20. Vaux took second place honors, shooting an 81, and Smith finished ninth with a score of 89.

Compared to last year, Simpson lowered their score by over 20 shots on Mount Mercy’s course.

Simpson will host the IIAC Championship Tournament Oct. 3-4. The tournament will be held at the Blank Golf Course in Des Moines.