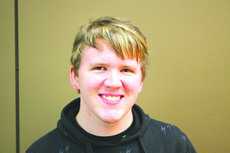 Junior Mark Rodgers, who left his hometown of Rathfriland, Ireland to study business administration at Simpson, is enjoying his first year as an international student.

“People have a stereotype that Americans are not the nicest people, but everyone here is really nice, and they are always asking how I am, how I’m adjusting and about Ireland,” Rodgers said. “I really like the campus and the community spirit.”

“They offer a year-long opportunity to go to America and study business to give students international experience,” Rodgers said. “It sounded like a lot of fun. I like to travel, so why not do it?”

Rodgers admits that becoming an international student hasn’t been an easy transition to make.

“It’s kind of a rollercoaster,” Rodgers said. “It’s either really hard or it’s really great. Although, the relationships I’ve made with people here make it a lot easier.”

Steve Griffith, vice president and dean for academic affairs, and his wife are the host family for Rodgers while he is in the United States and have had a positive experience with Rodgers since his arrival.

“I can say for both my wife and myself that it has been great getting to know Mark,” Griffith said. “It’s been fun hearing about his family and growing up in Northern Ireland. We look forward to getting to know him even better as the year goes by.”

With all the new people that Rodgers has met and with the new friends that he has made, many of them have asked him similar questions.

“People are interested in hearing about the European perspective of America,” Rodgers said. “They want to know what’s different or what I think of the American culture.”

While Rodgers is having a good time being a student at Simpson, there are a few things that he misses from home.

” I miss the food quite a lot,” Rodgers said. “I miss potatoes and my mom’s cooking. I’ve had enough burgers here that I have burgers coming out of my ears.”

While burgers and pizza aren’t Rodgers’ favorite American foods, there is a food that he finds rather appealing.

“Lucky Charms are absolutely delicious,” Rodgers said. “They are quite lovely. I will be taking a few boxes back home with me.”

Although Rodgers will eventually return home, he strongly encourages students to travel internationally and to experience the world.

“Do some international traveling,” Rodgers said. “There’s so much to see out there. It’s good to expand your views, experience a new culture, learn about yourself and push yourself to the limit. It can only lead to your growth as a person.”