Students speak out on weight of student voice in election 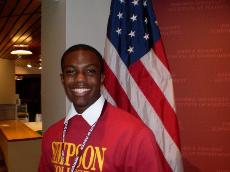 Every four years, we as Americans have an opportunity to choose the leader of this great country. This is an immense responsibility that needs to be taken seriously. Our decision will have ramifications well into the future. The person we elect will be the most powerful figure in world politics. He will choose the direction of our country and the world as a whole.

Many people in this country are too apathetic to this monumental event. Far too many Americans are more worried about who is going to get voted off “American Idol” than who will get elected to lead the free world. This is unacceptable.

We all have issues that matter to us, whether you believe so or not. College students should be worried about the rising cost of tuition in America’s universities, and nothing will change until we, as college students, speak up and make ourselves heard. Politicians have to know that we are a generation larger than the baby-boomers and we have a voice. We will be heard. Nov. 4, 2008 will be the day our future is realized. Ask yourself this: Do you want to be part of the solution or part of the problem?

The vote is an essential part of any democracy. The vote can change the path of a community, city, state, and in a nation as influential as ours, the world. The individual vote is what campaigns spend millions and millions of dollars on every election cycle. Politicians obviously care about the vote. But why should you?

You should care because whomever the United States elects as president will directly influence the direction this country takes. What is even more crucial about this election cycle is that the party that wins this election will have an edge for the next 40 years. We are at a turning point in history, where our generation, the Millennials, will make our mark on the future of our country.

I am voting for Barack Obama, a man who believes in our generation’s resolve and ability. In a speech, Obama said, “We are the ones we’ve been waiting for. We are the change we seek.” New challenges beg for new solutions. Now is our time, our introduction to the world. The vote is our greatest power and our greatest responsibility.

We worry about paying off tuition, balancing jobs with school, dealing with illnesses in our family and wondering if there will be jobs waiting for us when we graduate from Simpson. Our voices have been ignored for far too long in elections past. Now is the time that students can come together to make a difference for our future. The election can and will be different.

Barack Obama has inspired thousands of Americans, including students like me. I will continue to fight for that same message that rings in my ear day after day, month after month: “Yes we can.” Obama has taught me, and I hope to teach others, that one person can change the world. Isn’t that amazing? There are 33 days left. Will your voice be ignored, or will your voice be heard across the nation?