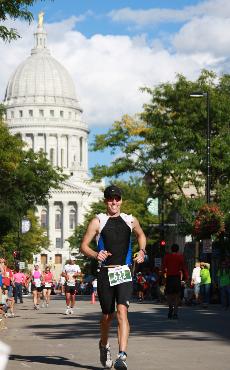 Who would want to swim 2.4 miles, bike 112 miles and run 26.2 miles, all in 12 hours? Simpson’s own Ryan Rehmeier, assistant professor of biology, was crazy enough to do it.

Rehmeier participated in the Ironman Wisconsin competition last month and finished in 12 hours and 40 seconds.

“It was pretty difficult for me, even with my training program,” Rehmeier said.

The race may have been difficult to begin with, but Rehmeier injured his toe coming out of the water. He had to participate through the pain for the rest of the event and had to put pressure on that toe while running and biking.

“The hardest part of the race was the marathon,” Rehmeier said. “It got pretty painful toward the end.”

What helped push Rehmeier through the pain was his support system. He had many people come and cheer him on. His wife, two sons, mother, mother-in-law and even another Simpson professor, Jeff Parmelee, associate professor of biology, made the trip to cheer him on.

“It was fun to go to various places to watch him,” Parmelee said. “It was an all-day event, and he was going through adversity just to participate in it.”

Senior biology major Kate Tillotson was not surprised that Rehmeier wanted to attempt this event.

“I knew he did this stuff before. so I wasn’t surprised,” Tillotson said. “He is pretty ambitious, and I was excited for him.”

“I am surprised by anyone would who do this because it is so difficult,” Parmelee said. “If anyone would do it though, it would be Rehmeier because of his dedication.”

To prepare for this competition, Rehmeier had to go through a tough training program to get himself in shape in time for the event.

“I pushed myself pretty hard the past six to eight months before the competition,” Rehmeier said. “I would go on hour and a half swims, ride my bike for seven hours or go on three hour runs.”

“There is a nutritional part to it along with the fitness part,” Rehmeier said. “I was very happy with how well I was prepared for my first time at this distance.”

Parmelee also thinks that there is a mental preparation you have to do before you do these events.

“There is a mental side to preparing before Ironman competitions,” Parmelee said. “You have to be mentally strong to push yourself to run 26 miles after you just got done biking for 100-some miles.”

What made Rehmeier want to participate in an Ironman competition?

“I have been doing them for the past seven years, but it all started because I wanted to lose weight and get in shape,” Rehmeier said. “It made me set a goal and try to achieve it.”

This is one of many competitions that Rehmeier has participated in over the last seven years, and doesn’t expect to stop soon.

He had advice for aspiring triathletes.

“It is a great sport where you are surrounded by a great community, and it provides a tough challenge,” Rehmeier said. “My main advice is that your first competition should not be an Ironman competition. You should start small and gradually get bigger.”