Fun for some causes headache for others 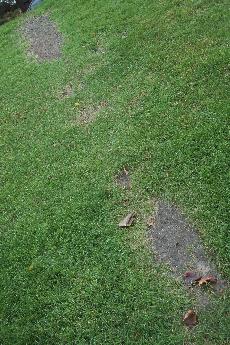 While the cloudy days and rainfall keep many students cooped up in their rooms studying or hanging out, recent showers have led some students to come up with the idea of sliding down hills enough in one spot to create a slick mud slide.

Although in most situations, this idea of fun and games would seem harmless and only leave rather fond memories, the most recent case of mud sliding has left a trench on one end of the practice soccer field.

As of now, the slide has grown over and begun to recover, but at the time of the incident there was over a month left in the soccer season and the soccer teams were forced to avoid that particular spot to make sure injuries didn’t occur.

“The damage to the practice field is disturbing considering our season had a month-plus left and that part of the field is not playable,” said head women’s coach Cory Chapman.

The mud slide that created the trench, while not stopping practice altogether, did cause the soccer teams to make a few changes.

There were times where practices that were scheduled to take place at the practice field by the fraternity houses, where the incident took place, had to be rescheduled for the turf. This required each team to figure out other athletic teams’ schedules and work their practice times in between them.

“We [the women’s soccer team] like practicing on the turf better anyway, so it didn’t really inconvenience us too much,” freshman forward Katherine Bird said. “I think we had to change practice times a few times.”

With the damage that was done carelessly to the soccer field, many of the individuals involved with the team are upset that students chose that hill to indulge in the activity when there are many hills on and off campus that could have been used.

“It’s no secret that it is our practice field and we use it most of the time,” senior defender Evan Johnson said. “So if you need to mudslide, use common sense and go somewhere else. It’s one thing when we leave divots on it, because it’s our field. When someone leaves a trench from screwing around, it’s irritating.”

Some who participated in the activity said they had not considered the consequences to the soccer field.

“We [saw] a few people over there already and decided that it looked like a lot of fun,” freshman Josh Wardenburg said. “Eventually more and more people came and nobody was really thinking about the soccer field, just the fact that it was a good time.”