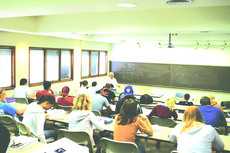 While Wall Street tycoons and national bank CEOs are growing increasingly apprehensive about the financial crisis of the past two weeks, college students are beginning to feel the impact, with their student loans and thereby their futures, on the line.

Banks and investment firms across the United States are tightening their credit as a result of the subprime lending failure, making it difficult for college students to obtain loans.

Tracie Pavon, director of financial assistance, said that this crunch is mainly due to fears that students will be unable to pay their debt and lenders will have nothing to collect on.

Although federal loans will continue to be distributed to as many students as possible, students often still fall short of meeting their financial aid needs. In the past, students have been able to rely on private loans. Now many of those lenders are retreating from the student loan market.

Those lenders that remain now require students to have a cosigner.

“This is something that has been happening for the past 15 to 18 months,” Pavon said. “We knew way back in November where this was headed and we sent notices to students who had non-cosigned loans.”

As tuition increases, the number of students attending college each year increases as well, creating a compound problem.

“When you sit down and look forward into the future, into 2009, it rapidly becomes apparent that more and more students are applying for and qualifying for financial aid at a time when less aid is available,” Christopher Penn, chief media officer for the Student Financial Aid network said.

Penn went on to say that 8.9 million students filed for financial aid in the first half of 2008, up 16 percent from the year before. Financing this increase would be difficult, even in ordinary times.

“We’re about as far from ordinary times as you can imagine,” Penn said. “Congress and the Federal Reserve Bank are spending every available dollar trying to bail out major financial institutions – the money for additional higher education spending simply isn’t there right now.”

Although the financial impact could be devastating, for some students, financing their education is just one part of the equation.

“The thing that concerns me most is the rise of inflation,” junior Rhonda Buys. “With the cost of everything going up, it just gets harder to pay for things.”

Buys commutes from Prairie City, where she lives with her husband and four children. Her family has had to cut back on extra spending.

“Whatever extra we might have had, we have to put toward gas,” she said. “We don’t go out to eat and we don’t take our kids to the movies.”

It is also affecting students considering May Term trips. Jay Wilkinson, international education coordinator, said that the numbers for students going on trips this year is down for now.

While the student loan crunch is a factor, however, the number of students signed up may increase as students have more time to consider whether they can afford it. He also added that those who can afford the trips to begin with will still go.

“Last year we had just under 200 students go on trips,” he said. “I would be very surprised if we ended up with less than 175.”

The current financial climate is also weighing on the minds of incoming college students.

“Obviously financial planning is an important factor for any family involved in the college selection process,” she said. “We are committed to working with families to help them navigate the financial assistance process and providing the information they need.”

While the financial situation will undoubtedly continue to fluctuate in the coming weeks, Pavon said the restrictions on student borrowing may actually benefit them in the long-run.