Concert offers plenty to think about 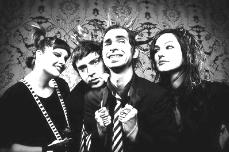 As a production assistant at the Val Air Ballroom, I have been able to attend quite a few concerts. Usually I consider most of the shows I work as “another day, another dollar.” However, I must say, the Mindless Self Indulgence show on September 25 was an absolute riot.

If you know anything about the band, you would appreciate kids in big yellow banana suits and girls with face paint and tutus.

If you don’t know the band, this all may sound a bit “Cirque du Soleil,” but it was amazing to see the amount of energy MSI was able to generate among those in the crowd.

The band was able to take the stage following a short series of technical difficulties revolving around the tour manager’s laptop and a five finger discount.

Despite the set back, the band had an amazing presence on stage. Lin Z, their base player was awesome. Her facial expression was remarkably calm and collected during the entirety of the show, regardless of the fact that she was all over her side of the stage: standing, dancing, jumping, sitting, and kneeling. It was intense.

Kitty, the drummer was outstanding. A drummer can generally be blocked by a lead singer or lost in the seizure ensuring light show, but this girl could rock! She definitely was holding up her end of the deal.

And for a lack of being able to find one word that can encompass lead singer, Little Jimmy Urine, I advise you to check out Youtube.com and search this band.

The group had a killer stage presence, outrageous light show, a die-hard crowd and more energy in their pinky fingers than most nuclear power plants.

As for MSI’s opening bands; there’s one worth checking out if you want some techno tunes and one you should check out just for a good laugh. You may be hard pressed to find either of these bands on the internet as they are still young bands with no lawyers and a two item merchandise section.

The band worth a laugh is “I Am the Dream.” In a nut shell, this band consisted of a guitar player, a CD, a laptop, and a “singer.”

Unfortunately, I can’t tell you the names of their songs or the ideas behind their lyrics because I, along with the majority of the crowd, could not understand either. Their super-sonic-half-a-band was a bit of a flop.

Hopefully they can pull it together soon or they are going to continue to experience confused glares and people taking a seat during their set.

Also, I heard peroxide can work wonders for scratches in a disc; they should look into it so ten minutes of their stage time isn’t spent trying to get their music to stop skipping.

On the other hand, a band you may want to check out blew me away as an opener. Dearestazazel, pronounced dear-est-ah-zah-zel, had some distinct style.

Their lead singer, Peter, decked out with stringy white/blonde hair, super pale face and a suit jacket, was electrifying. I have never seen a kid jam out on a keyboard/scratcher like this before. Not to mention he was an absolute sweetheart in person.

Their guitar players, Jimmy Lee and Jesse, were great supporting artists and were excellent at encouraging crowd involvement. And Ricardo, another drummer not lost in the shuffle, could throw down behind the lead.

If you want to go on a witch hunt for their CD, it’s entitled “Sex is a Sin.” Check out “Onboard the Drug Train” and the Satan song. Both should get a good pumped up head bob going for you.

Both of these bands, MSI and Dearestazazel, were completely inappropriate and delightfully disturbing. So if you appreciate my sick sense of entertainment value, you should definitely check them out.

And one final bit for you all to think about: If you don’t find a pulse in music, you may already be dead.