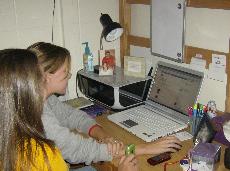 Starting with the class of 2012, the residence life staff started a new trend of allowing incoming freshmen to choose their own roommates-through Facebook.

Luke Behaunek, first-year area coordinator presented the idea of picking roommates through Facebook to the all of the freshman at summer orientation.

“I had been thinking about this halfway through last year,” Behaunek said. “I had heard about a roommate selection program that’s being used at other schools, but it was very expensive. I thought that using a medium that students use would be best, and it’s free to the school.”

The students were encouraged to join the Facebook group entitled, “Facebook roommate selection for the class of 2012,” and then provide some information about who they were, what they were looking for in a roommate, and other miscellaneous information.

“I felt like I was on an online dating site,” freshman Nicole Olson, who participated in the Facebook roommate selection, said. “For the most part, it has worked out really well between my roommate and I.”

In the Facebook group, students were asked to provide basic information such as their major, along with answers to particular questions that are potential issues that could come up between roommates. The questions ranged from what time they went to bed and woke up every morning to how they preferred their room cleanliness.

“The Facebook pairing was far more successful than I anticipated it being,” Behaunek said. “I wasn’t necessarily sure what to anticipate, but I’m extremely pleased with the result.”

Almost 100 freshmen took advantage of picking their roommates, which is close to one third of the freshmen class. However, even though a large portion of this class took part in “ownership and control over their first year,” many students didn’t. They allowed their roommate to selected for them by their survey answers-and ended up with results just as good.

“I was mostly curious to see how well they’d pair me,” freshman Abby Heim said. “I didn’t want to pick my own roommate through Facebook because if it didn’t work out, it’d be my fault.”

“Luckily, it worked out perfectly,” Landers said. “For the most part, we literally are the same person. I don’t think I could live with anyone else because we are so compatible on the little things.”

With the issue of roommates moving out due to continued conflict, so far this year. The issues have been less with the roommates who chose through Facebook.

“As expected, we have had some roommate conflicts with the Facebook pairing and from the other pairs as well,” Behaunek said. “However, we’ve had fewer conflicts with the Facebook paring than the regular survey pairs, but it’s still early in the year. I’m hoping to complete a survey to determine its effectiveness and continue this for upcoming years, barring any negative results.”