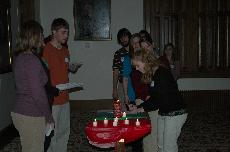 Several honor societies on campus have held inductions recently, honoring those students who have qualified to become a part of their respective groups.

Organizations including Beta Beta Beta, Order of Omega and Omicron Delta Kappa have all welcomed new members in the last few weeks.

Omnicron Delta Kappa holds the highest distinction and honor on campus. Their membership is almost entirely based on leadership and GPA. The society is available to students, faculty, administrators, staff and alumni.

“ODK is important because it represents accomplishment in class and yet being involved,” senior Kendra Frush, president of ODK, said.

Along with leadership in general, Omnicron Delta Kappa members must demonstrate achievements in specific areas of scholarship, athletics, campus and community speech, social and religious activities, campus government, journalism, speech and the mass media and the creative and performing arts.

Omicron Delta Kappa works toward recognizing the leaders of campus and tries to bring together all of the students of the collegiate life. They also want try to bring the faculty and students on a mutual, relaxed interest and understanding.

Some of the main projects that Omnicron Delta Kappa have taken on in the past include putting together the gift bags that parents can send to students during dead week and finals. They have also brought speakers to campus and have hosted leadership retreats.

Beta Beta Beta is an honors biology fraternity. It recognizes students that are taking or have taken three biology courses and have maintained a GPA of 3.0 or higher in those classes.

Beta Beta Beta meets every other week and has high hopes for this year’s pledge class.

Order of Omega is another organization on campus that recently held inductions.

To be eligible for Order of Omega, students must members of a Greek organization on campus, have completed two fulltime semester’s worth of work at Simpson and be a junior at the time of application. Students applying must also have a GPA above the Greek GPA average of 3.142 and be in good standing with their fraternal organization.

Order of Omega is widely known for being a leadership organization. They focus on bringing the Simpson campus closer together, along with strengthening the bonds of Greek life.

Order of Omega holds similar goals to Beta Beta Beta for the year.

“Our main goal this year is to make our chapter more present on the Simpson College campus,” senior Emily Kacere, Order of Omega secretary, said. “Order of Omega has been on the campus for a while. However, not many people know what we do or even who we are. We’d like to change that. This year we will be participating in several service events throughout the school year, in Indianola and surrounding communities. We also hope to be involved on campus, for example, by sponsoring an event during Greek Week.”

“What I like the most about Beta Beta Beta is the fact that it brings the biology students and faculty together outside of the classroom in an informal manner,” junior Greg Sibbel said. “It’s very relaxed.”