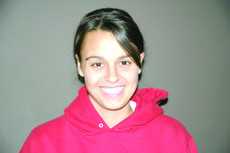 Senior Jess Nims went from one court to another within a few weeks.

The Urbandale native is the captain of the women’s tennis team and was crowned homecoming queen on Oct. 24. Nims said she never saw it coming.

“I was so stunned,” Nims said. “It’s an honor to know that your peers respect you that way.”

This isn’t the first time Nims has been on the homecoming court. She was the representative of her class her sophomore and junior year.

Nims is a speech rhetoric and communications major with a minor in management and is planning on attending graduate school after graduation.

Nims has been the captain of the women’s tennis team for three years. She says the experience has helped her become a great leader.

“Being captain has given me an opportunity to be a leader,” Nims said. “It’s a great way to help the incoming freshman transition into college. It can be difficult to juggle athletics and academics, so I’ve been able to help them with that transition.”

“I recruited [Nims] from high school because I saw great leadership and tennis skill abilities in a player who was very successful in high school tennis,” Nutgrass said. “She played #1 and #2 doubles all four years as a tennis starter and has been in the top three of our lineup for four years.”

In her free time Nims works at a day care in Indianola called Our House Child Care. She also enjoys spending time outdoors, playing intramurals, and spending time with friends.

Nutgrass says that Nims has been an important part to the Simpson community.

“I was very lucky to be able to get her to attend Simpson and she has been an outstanding athlete and representative of Simpson College,” Nutgrass said. “She has been awesome for our program and a great friend to all the coaches and teammates she has had the chance to compete beside during her four years in the Simpson College tennis program.”