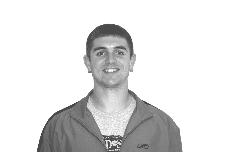 Senior Brody Tubaugh wore more than a football helmet two weeks ago; he sported a crown.

The Centerville native plays wide receiver for the Storm football team and was crowned homecoming king on Oct.24. He said he had no idea the title was coming.

“I was shocked,” Tubaugh said. “Honored, but shocked. It was actually kind of humbling. I didn’t realize I would even be up for something like that. To be honest, I didn’t even know the process. It was nice to know the people on campus, the students and faculty, thought enough of me to vote for me.”

When off the field, Tubaugh focuses his studies on a religion major with a minor in management. He plans on going to seminary after graduation at either Northwestern University in Chicago, or Duke University in Durham.

“I hope to someday be a pastor,” Tubaugh said. “I would love to lead my own church.”

Jan Everhart, assistant professor of religion, has taught Tubaugh in several religion classes. She has helped guide him along his career path.

“Brody has always felt drawn to religion,” Everhart said. “I’ve encouraged him to talk with his pastor, and that has given him the opportunity to preach at his hometown church. It’s helped him to know that the people in his congregation support him and encourage him to continue on preaching.”

Tubaugh is also the president of Fellowship of Christian Athletes and is involved with the pre-ministry group on campus. In his free time he enjoys seeing his friends and family.

“I enjoy spending time with family,” Tubaugh said. “My sister goes here, so it’s fun to hang out with her. My parents are travelers, so they’re up here as much as they’re home it seems like.”

Everhart knows Tubaugh will have a successful future and speaks highly of his personality.

“Brody is a person of integrity,” Everhart said. “He’s always willing to put effort in everything including athletics, academics and his religion. He’s the kind of person you want leading any group.”