Storm volleyball comes to a close after riveting season 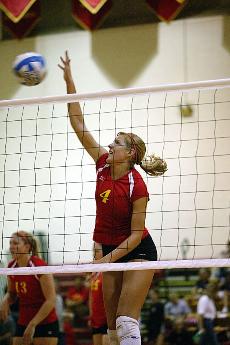 After sweeping through much of the conference, this year’s Storm volleyball squad’s season has come to a close. After bowing out in the first round of nationals to St. Benedict (3-1), the team may feel they have been left short of their destination.

They looked to be traveling deep into the tournament, but have certainly not left the fans short on excitement and pride for Simpson athletics.

This year’s team never lost sight of their goal of nationals. The team of Head Coach Lana Smith compiled a record of 25-15 and settled for second place in the conference, ending with one loss. They were also able to lead their opponents in the categories of aces, kills, assists and digs.

Carrying the load in the assist column has been junior setter Tara Christensen. Christensen has turned out 1,245 assists for the Storm this season. Along with hard work in the aspects of passing and defense, the team continued to bring each other closer together throughout the season.

“We tend to spend a lot of time together on the bus rides.” Christensen said. “So we use it to our advantage in bonding with each other.”

Bringing the team together has been a key element to this season’s successes.

“We like to have fun, along with working hard together as a team,” Christensen said.

Hard work can be appreciated by all those involved in athletics, even the spectators. One avid volleyball supporter who has recognized the work shown by this team all season is sophomore Pat Tierney.

“The girls always played hard this season,” Tierney said. “It was great being able to show up and cheer them on as they dominated the conference.”

Tierney loves being able to come to games knowing two things are going to happen: the Storm is going to dominate anything that the conference has to throw at them and he is going to see his fellow classmate and friend dominate as well. And sophomore outside hitter Amy Schuster has done just that. She finished the season with a team-leading 366 kills.

Many key players for the Storm look to continue their dominance next season as others try to work their way into consistent playing time. Fans can expect to see more of the already-statistically-established players of junior middle hitter Whitney Oviatt, junior libero Brittany Friesth, freshman middle hitter Megan Dunlavy and junior overhead hitter Lara Gillespie.

One of the key load-carriers that won’t be returning for the Storm is senior middle hitter Jayna Fischbach.

Fischbach brought the season to a close with 203 kills and finished second on the team in blocks with 53. Fischbach is one of two seniors, the other being Amanda Norelius, who’s season never got fully under way after surgery.

Fischbach had an interesting situation added to the end of her career as a volleyball player. Since there was no guarantee of being given a bid to nationals, she had already accepted the terms of not playing volleyball anymore.

“I was really surprised to be getting a call on Monday saying that we would be playing Thursday,” Fischbach said. “The last few days of practice have been surreal since I initially thought that my career was over with.”

Although her volleyball career is over, it isn’t the last that will be seen of this athlete. Fischbach will quickly make the transition into the women’s basketball team.