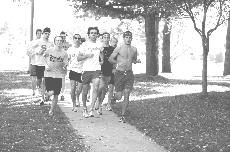 Up to this point in the season, the men’s and women’s cross country teams have had a successful year.

They have continued to exceed expectations and look to extend their season as long as possible. There is continued improvement each week on both the men’s and women’s sides.

The teams competeted against powerhouse teams throughout the year from around the Midwest. While finishing in the middle of the pack throughout the season, however, each of the teams has steadily improved to put themselves in good position for the end of the season.

“Since a lot of members on the team were injured last year and have come back this year to produce, that is a success in itself,” junior Tricia Davis said.

Senior leader Eric Osterhaus has been a standout this year for the Storm men’s team. He looks to become an All-American this year and hopes to qualify for nationals in a few weeks.

Other Simpson cross country members have begun to close the gap between themselves and the other conference runners, including junior Eric Patten and freshman Ryan Edwardson.

“We’ve had an amazing season,” Patten said. “The team really pulled together and laid it on the line. It’s really been a fun atmosphere to be a part of.”

On the women’s side, sophomore Catie Ellingson has been leading the Storm pack and is looking to improve on last season’s All-Region selection.

Like the men’s team, a few of the women have stepped up and improved with each week. Davis has stayed healthy this year and has given it her all to improve her times. Freshmen Emily Tripp and Rachel Smith are also among the standouts of the team.

“We have matured a lot as a team and we are starting to realize just how far this team can go with the right attitude and work ethic,” Head Coach Brad Hofer said. “That is very exciting to see.”

Last Saturday, the cross country teams ran in the Iowa Conference Championships hosted by Buena Vista and hoped to have their hard work pay off. Fourth place went to the men, while the women’s team finished fifth.

Along with that, three Storm runners finished in the top 15 of their respective divisions and earned All-Conference honors. Osterhaus and Patten finished fifth and sixth, respectively. This was the best finish by Simpson mens’ runners in the conference meet since 1995.

Ellingson was the third Storm runner that earned All-Conference this past weekend, as she placed 14th overall for the women. Edwardson just missed earning All-Conference honors, as he finished in 17th place.

“I always have big dreams for the athletes and the teams that I coach.” Hofer said. “Yet with all things considered, I am very pleased with the growth of both teams.”