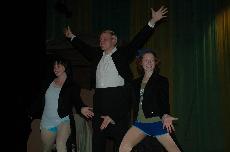 Two shows are set to hit campus this weekend.

On Friday evening, students can see Tyler Hilton perform in a concert sponsored by CAB in the BSC.

Theater Simpson will also present their fall musical, “A Year with Frog and Toad,” throughout the weekend.

As a singer, song writer and actor, Tyler Hilton is known as a triple threat. The 24-year-old made a name for himself as Chris Keller on the hit CW television show, “One Tree Hill.”

Hilton began writing music at 14 and released his first album, “The Tracks of Tyler Hilton,” with Maverick Records in 2004. He has been compared to Elton John and Howie Day.

He portrayed a young Elvis Presley in the movie, “Walk the Line,” and also acted in the film, “Charlie Barlett.”

Hilton’s sound is catchy and tends to attract young crowds.

Simpson CAB students were in St. Louis at a convention when they came across Hilton.

“We actually ran into him when we were at the club he was playing at for the conference,” junior, Amanda Yanchury, CAB co-president said. “We started chatting and before you knew it, we were talking to his agent and working on a price for him to come to Simpson.”

The show starts at 8:30 p.m. with doors opening at 7 p.m. The show will be for Simpson students only.

“A Year with Frog and Toad”, is a musical based on the award-winning children’s books by Arnold Lobel.

“I strongly suggest you to bring your young siblings or family members,” Markus said.

The cast members described that show as an adventure that is sure to keep the audience entertained.

“It really doesn’t have a plot, it’s more of an adventure,” junior Kyle Bochart said.

“A Year with Frog and Toad,” is directed by Jennifer Nostrala and features Bochart as Frog and Matt Paladino as Toad. Melissa Markus, Jacob Kaufman and Kayla Dvorak perform as the show’s chorus, in which they all play multiple roles.

Markus attests that the relaxed nature of the show will be a welcome break for students.

“It will be a nice break before finals to come see this performance,” Markus said.

The show is open to the public beginning with a matinee on Saturday, Nov. 22 at 1 p.m. There is also a 7 p.m. showing on Saturday evening and a 1 p.m. matinee on Sunday.