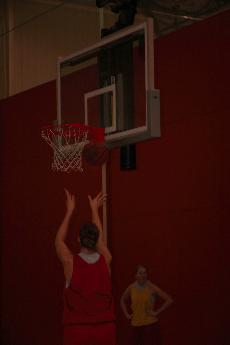 After three straight conference championships, consecutive Sweet 16 appearances and graduating three All-Conference players (one of which was an All-American), most teams would be looking at a rebuilding year. Not the Simpson women’s basketball team. They don’t rebuild. They just reload.

The Storm entered the 2008-09 season ranked nationally in both major preseason polls: 16th in the USA Today/ESPN Division III poll and 19th in D3hoops.com poll. Anchored by an experienced senior class that has tasted the NCAA Tournament in every season of their careers, Simpson has lofty expectations once again.

It goes without saying that the team is a heavy favorite to win the Iowa Conference. For some, the pressure to win would overcome them, but not these women.

“The team looks at the rankings as a good sign that our team is respected as one of the better programs around,” senior guard Jemi Kuberski said. “It puts a target on our backs but it helps to keep us motivated to work hard in practice.”

The Storm will be led by the Senior Seven (maybe 7.5 to account for Smith), but the veterans have welcomed seven heralded newcomers of their own that will look to continue the legacy of excellence. Despite the mass of upperclassmen, however, head coach Brian Niemuth is still searching for an identity early in the season.

“I’m trying to figure out what we can do,” Niemuth said. “We can be very athletic and really run and press, but I don’t think the girls understand that yet. I think we’re a very balanced team. We have a chance to go deep into our bench.”

Niemuth praises the Senior 7.5 for their incredible leadership off the court, but has a concern when the team is on the hardwood that will take time to work itself out.

“They go about their business and work hard, but they’re not very outspoken and sometimes that can be a problem on a basketball court if they’re not communicating,” Niemuth said. “We’re going to have to ask them to get outside their comfort zone a little bit and be more verbal on the floor and communicate a little bit better.”

Montague understands that there will be some setbacks along the way as the old and new groups become more familiar with each other.

“We hope to learn how to work best together on the court during the first few games,” Montague said. “Our hard work and hustle will get us through the early stages where we might not know everyone’s tendencies and who works together best.”

The Storm had everything working the second-to-last weekend in November. They won the Nebraska Wesleyan Classic by beating Carthage College 84-82 in overtime on Nov. 21 and then handling the hosts 70-59 in the championship game on Nov. 22.

Chemistry shouldn’t be a huge issue for the team, as they worked out together just about every day in the preseason, either in the weight room or playing pickup games. The question is, can the Senior 7.5 keep the team motivated enough to remain at the top after experiencing so much success already in their careers? Montague can answer that.

“We are just playing one game at a time,” Montague said. “We try not to look too far ahead because we have to take care of business during all our conference games and not take any team lightly.”

That strategy is fine with Niemuth, who is building on his resume as the program’s leader in career wins. But he prefers to give the credit to his players, in particular the Senior 7.5, as they have put together a body of work that rivals his own.

“They have a chance to go out as seniors and be a group that played in the NCAA Tournament every year they were in college, which there are not a whole lot of college players, men or women, that can say that,” Niemuth said. “I’m real anxious to see what kind of legacy they’re going to leave here.”

But the Senior 7.5 aren’t ready to pass the torch quite yet.

Kuberski just wants to have fun and make some final memories before she and the rest of the Senior 7.5 etch their legacy in stone.

“I am most looking forward to spending this last season with my teammates and hopefully going farther than we have before as a class,” Kuberski said.

Niemuth plans to let the Senior 7.5 motivate one another this season.

“You’re always remembered for your last year,” Niemuth said. “I don’t care if you win three conference championships, you’re remembered for what you did your senior year. So I hope they understand that and it motivates them a little bit. I want to find out how good this group can be, if these seniors can step up and carry the rest of the team. I think they have some challenges out there to look forward to.”

The Senior 7.5 aren’t ready to pass the torch quite yet.