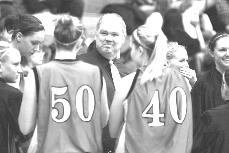 In his 22nd year of coaching at Simpson College, Brian Niemuth, head women’s basketball coach, won his 400th career game. The milestone victory came against Luther College at Cowles Fieldhouse on Jan. 7 with a 73-43 win.

Since the landmark victory, the Storm women have earned victories over Loras on Jan. 10, Coe on Jan. 14 and Wartburg on Jan. 17. Those conference victories bring Niemuth’s career coaching record to 403-169.

Niemuth said one of the good things about reaching the milestone of 400 wins is that it has allowed him to reflect on his coaching career and the players that have come through Simpson in his time as head coach.

He said one of the greatest joys he has as a coach is watching the players develop from the time they walk in the door as freshman to the time they get their diploma.

“Winning is important to me,” Niemuth said. “But the biggest thing for me is watching the ladies when they first get here as freshmen and what they’re like when they leave as a senior, and the growth they’ve had through those four years is what I get the biggest thrill out of.”

Athletic director John Sirianni said one of the most impressive things about Niemuth is his unique ability to win while being well-liked and well-respected by his players.

“When you put the win-loss record he has together, and the feeling of what the kids feel, how the players feel about him, and his image and reputation in college sports in Iowa and the Midwest, he is special,” Sirianni said. “He’s just special.”

Junior forward Whitney Franker noted how special the landmark win was and acknowledged the amount of work Niemuth has put into building the basketball program.

“This is a feat that a very select number of coaches achieve,” Franker said. “I thank him for all the work he has put into the program and each and every player.”

Senior guard Laura Montague said it was a great feeling to be able to help Niemuth reach such a historic milestone and said it was fitting that the 400th win came at Cowles Fieldhouse.

“When we knew it was going to be a home game, that made it even better,” Montague said. “It was great to be able to work hard and be a part of such a great accomplishment.”

Franker added that one of Niemuth’s greatest attributes as a coach is his ability to instill in his players the importance of working together.

“As a player he has made me realize the importance of playing as a team,” Franker said. “It’s much more fun to win and score zero points than it is to lose and score 20 points.”

When asked about some of the more memorable moments he’s had as head coach, Niemuth talked about the development of the players as being some of the great memories he has.

“I don’t think there’s any one particular thing I remember or two,” Niemuth said. “But it’s just the players and their development as people during those four years. I really care about the players not just on the court, but off.”

Sirianni said one of the great things about Niemuth is the respect he has earned as a coach from both his players and his opponents.

“To be able to blend those expectations and demand and still maintain the respect of a student athlete is a very special talent,” Sirianni said. “Sure, everyone gets fired up to beat him ,but they respect him as a person, the kinds of kids he recruits and they respect how these kids play and handle themselves.”