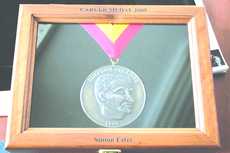 The award is given out each year to an individual who has been a proponent of helping other people.

“We look for someone who has a national stature and who has exhibited a commitment to others,” Walter Lain, assistant dean for multicultural and international affairs, said. “It’s focused primarily on an African-American who has demonstrated these kinds of qualities.”

Lain said that the decision-making process takes several months and involves many voices from all around campus.

“There’s a community of people and there are recommendations,” Lain said. “Lots of names go into the hat.”

Administrators, department chairs, faculty members and program directors are all involved in the process to determine who will receive the Carver Medal.

Lain said that several factors led them to select Estes as this year’s Carver Medal recipient.

“He has many great musical accomplishments, and his connections several years ago brought several South African students to Simpson College,” Lain said.

Senior Highway Sigadi is one of those students.

“Back in 1995, he came to South Africa to perform at the opera house,” Sigadi said. “We [the high school choir] went to sing for him at the airport in Cape Town.”

Estes was so impressed with Sigadi and the choir, he helped them gain publicity in the United States.

“He wanted the choir to perform in America,” Sigadi said. “We came to Des Moines in 1998 and went to different high schools performing.”

A few years later, Estes mentioned Sigadi’s name at Simpson and assisted him in getting enrolled here.

Sigadi said that he is happy for Estes being the recipient of the Carver Medal.

“I was very excited because he’s somebody who brought me here,” Sigadi said. “I’m also happy to have that connection with Simpson.”

Many of Simpson’s music students are also happy to hear about Estes winning the medal.

Lain said that the Carver Medal is awarded to people who represent George Washington Carver’s values.

“I think it’s a great opportunity for Simpson,” Lain said. “It represents a legacy that was started many years ago, and it’s an important part of Simpson’s legacy.”

Lain also said everything Carver represents should always be remembered.

“One has to be awed by his humanity, his caring for the nation,” Lain said. “It really is a college treasure that we need to get out about Carver.”

Estes will receive the Carver Medal on Feb. 26 in Smith Chapel.