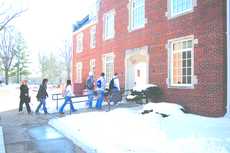 With the dawn of a new president, the economy is at the center of attention, especially at Simpson.

Administrators are preparing for tighter budgets in upcoming years.

In order to tackle this crisis, President John Byrd said that the college will have to issue new changes to be ready for potential shortfalls.

“We have to respond to the economy as it exists today,” Byrd said. “Since we are in a challenging economic environment, it requires that we think about the possible impact that the economy might have on the college and to make plans on how we’ll adapt to those changes.”

Since the stock market has seen historic lows recently, Simpson’s endowment is lower today than it was a few months ago.

According to Byrd, this decrease may reduce the spending budget.

“A return of an endowment allows [the college] to put money in our operating budget, which we can spend around five percent,” Byrd said. “If the endowment is worth five percent less of that lower value [it] means we have fewer dollars going into the budget.”

Another impact the college is facing is the decline in donors. As the stock market declines and job security is unknown, people feel less able to contribute. Some of the donors don’t give as generously as they would during a stable economy because they are responding in their own personal way and realize they have fewer resources to go around.

Though donor support may decline, Byrd said the most important factor the college is supporting is the students.

According to Tracie Pavon, assistant vice president for enrollment and financial assistance, students and their families are not immune to unemployment during the current economic environment.

“People are losing jobs and unemployment is going up,” Pavon said. “These circumstances may have some impact on how students go to school or how they finance their education. All of those things concern us.”

In order to keep students at Simpson and to gain more prospective students, Simpson is proposing to keep their tuition at a minimum.

“One of those things we need to be sensitive about is the kind of environment that students and families are in,” Pavon said. “Next year, tuition will be two of the lowest increases that we’ve had in the last 30 years.”

Along with keeping education affordable, Simpson is putting together community service opportunities that can substitute service for loans.

A new grant package called Earth Core will allow students that are interested in the environment and sustainability to work 10 to 15 hours a week completing service projects such as recycling, conservation, and research and education.

There will also be a United Methodist community service grant, as well as an increase in the Wesley Service Scholars program.

With these programs, Byrd said that community service can add another element to the college.

“In return for different financial aid packages, there’s a commitment to actually doing things in a community, which is an essential component of Simpson,” Byrd said.

Simpson also is considering increasing its loan program in response to many companies, such as Wells Fargo, that are denying loans to students.

The program will allow students who have special financial issues to obtain loans in a regular way through Simpson.

According to Pavon, Simpson is going to be proactive rather than reactive to the economic situation.

Freshman Julian Ladd agreed with Pavon and said that Simpson should take action.

“In order to increase student attendance, there should be more scholarships and loans available to them,” Ladd said. “I’m here on scholarship, and I know I wouldn’t be able to afford going to Simpson without this award.”

The looming economic situation can’t be fixed overnight, but President Byrd is hopeful that Simpson can push through.

“We are very optimistic for next year,” Byrd said. “We don’t know what’s going to happen because Simpson hasn’t been affected by the economy before. However, Simpson will be prepared and will be a better college for students in the long run.”