Luke Stover honored as an All-American 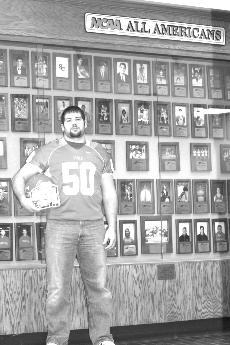 To become a D3football.com All-American, a player has to prove himself both in statistics and performance on the field.

According to Simpson College coaches, senior defensive lineman Luke Stover not only proved himself on the field but off the field as well.

In December, Stover was named a D3football.com All-American for 2008.

“Luke was one of those guys for us that made the other team have to account for,” head coach Jim Glogowski said. “He is such a good player that the other people had to figure out a way to block him.”

“Luke is the epitome of Division III football and is what this is all about,” Cordes said. “Luke is not the ‘rah rah,’ go out and get excited kind of guy. He led by example and established a tempo at practice that forced all the other guys around him to follow suit.”

Glogowski recognized Stover’s leadership not only in his talent and strength, but in his work ethic as well.

“From a physical standpoint, he is the ideal size, an extremely strong kid,” Glogowski said. “When you have someone that talented that you can count on for a certain level of performance, it makes everyone else a lot better and makes your team a lot better.”

At 6 feet 2 inches tall and 270 pounds, Stover’s build alone could have been a threat to any team, but Cordes said that Stover improved a lot even as a senior.

“From week one to week 10, Luke got better,” Cordes said. “He began to transition to our style of coaching and started to really execute and perform on the field.”

“Luke was able to, within our scheme, occupy double teams, which allowed our line backers to make tackles in the run game,” Cordes said. “He allowed us to commit more players to pass coverage because he was so dominant with his pass rush.”

According to his Division III standings, Stover ended the season with an average of 1.8 tackles for loss per game and was 53rd in sacks with 0.7 sacks per game.

Stover said he was in disbelief when he found out that he had received the award.

“Everyone wants to be an All-American, but seldom get to,” Stover said.

Stover gave most of the credit for his success to the other defensive linemen.

“If we didn’t have as good as a defense as we did, I wouldn’t have been able to do some of the things that I got to do,” Stover said.

Cordes commended the other defensive linemen as well.

“The other defensive linemen were very talented which allowed Luke to do his job and be isolated instead of continuously being double-teamed,” Cordes said.

Another outside factor that Stover felt contributed to his success was the new strength and conditioning program at Simpson.

“We got a new strength and conditioning program the spring of my freshman year, which allowed us to work smarter and become better, stronger and more physical athletes,” Stover said.

The Storm finished the season with a 7-3 record, tying with Loras for third place in the IIAC standings.

Stover plans on graduating from Simpson in December 2009 with a business management major.