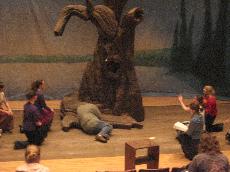 “Falstaff” is under the direction of music professor Robert Larsen.

“Falstaff” is an opera that is seldom performed by students, however Larsen believed that there were students this year who could fulfill the roles needed in the cast of the final comedy written by Verdi. Students have spent countless days rehearsing to perfect the character of their role.

Larsen chose a piece that tailored to his students’ talents.

“Creating a character in the opera is something truly amazing,” Larsen said. “I knew my students would do a wonderful job with this challenging role.”

The comedy begins with a series of unexpected events that turn the women against the men.

“The plot is basically surrounding the demise of a womanizer,” sophomore Aliese Hoesel said. “It is hilarious.”

Hoesel has a role as an understudy for the character of Alice Ford, and is part of the chorus for the opera.

The lead character, Falstaff, will be performed by senior Jesse Stock.

According to Larsen, Stock embodies the role of the aging knight wonderfully.

“I needed a talented, singing actor for the lead role,” Larsen said. “He [Stock] is a remarkable singer who took on the demanding role.”

According to Larsen, Verdi is the greatest of opera composers. Verdi wrote this ensemble opera at the age of 78, based on Shakespeare’s “The Merry Wives of Windsor” and “Henry IV, Part II.” “Falstaff” has a complicated rhythm that includes many ensemble pieces within the performance.

Larsen sees how his students enjoy performing and recognize the genius of the piece.

“The music is so beautiful and it’s so interesting,” sophomore Amy Willett said. “Every time we sing through it or run through it you find some little nuance in the music and it makes it special each time.”

Willett will be playing the romantic role of Nenetta, the daughter of Master Ford in the opera.

Larsen’s favorite thing about directing the opera is working with the students and presenting them with an opportunity to perform the music. The opera will be performed by a double cast, allowing more students to show their talents. The cast is made up of music majors and minors. The plot of “Falstaff” allows music production students to gain hands-on experience for recreating music in theater.

“Falstaff” will be presented in Lekberg Hall in the Amy Robertson Music Center.

Each year Simpson’s music department presents a fall and spring opera. This spring, the opera will be involving students from local elementary schools for part of the children’s chorus in the production.

Larsen said this a good opportunity for students to take in a medium they might not normally.

“This is a great experience for students to see it,” Larsen said. “It is a wonderful opportunity and it’s a comedy…its funny!”